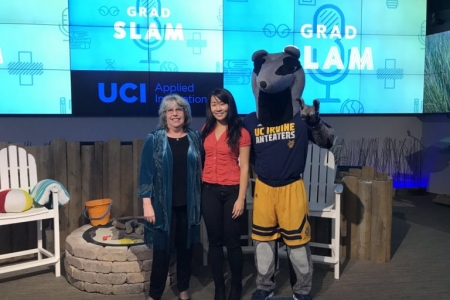 March 13, 2019 - Many insects are equipped with a natural defense mechanism against harmful pathogens: Their wings are covered with nanoscale spikes – 1,000 times thinner than a human hair – that kill bacteria and fungi cells. UC Irvine’s 2019 winner of the University of California Grad Slam competition is mimicking these antimicrobial surfaces in the lab for potential use on medical devices.

In her Grad Slam presentation March 8 at The Cove, Rachel Rosenzweig, a Samueli School doctoral candidate in materials science & engineering and a 2019 Public Impact Distinguished Fellow, spelled out a major problem in modern medicine and proposed some bio-inspired solutions. “Each year, there are nearly 2 million cases of hospital-acquired infections, leading to 99,000 deaths and $20 billion in healthcare costs in the U.S. alone,” she said. “The World Health Organization has declared drug-resistant microbes, or superbugs, to be responsible for these infections and warned that the global health threat will cause more deaths than cancer by 2050.”

Rosenzweig said her research aims to bypass the use of chemicals and drugs to solve this problem by coating medical devices with an antimicrobial “skin,” or what she calls “superbug kryptonite.” This is done through nanoimprint lithography, a low-cost technique that heats up a material’s surface and stamps on physically tailored nanoscale structures. Rosenzweig’s research has demonstrated the effectiveness of this method for decontaminating medical devices without toxic chemicals or pharmaceutical agents.

Having won UCI’s Grad Slam finals, Rosenzweig will compete against winners from other UC campuses in the systemwide championship, to be held May 10 at LinkedIn’s San Francisco headquarters. The event awards graduate scholars who deliver the best three-minute presentations on their research and its potential public impact.