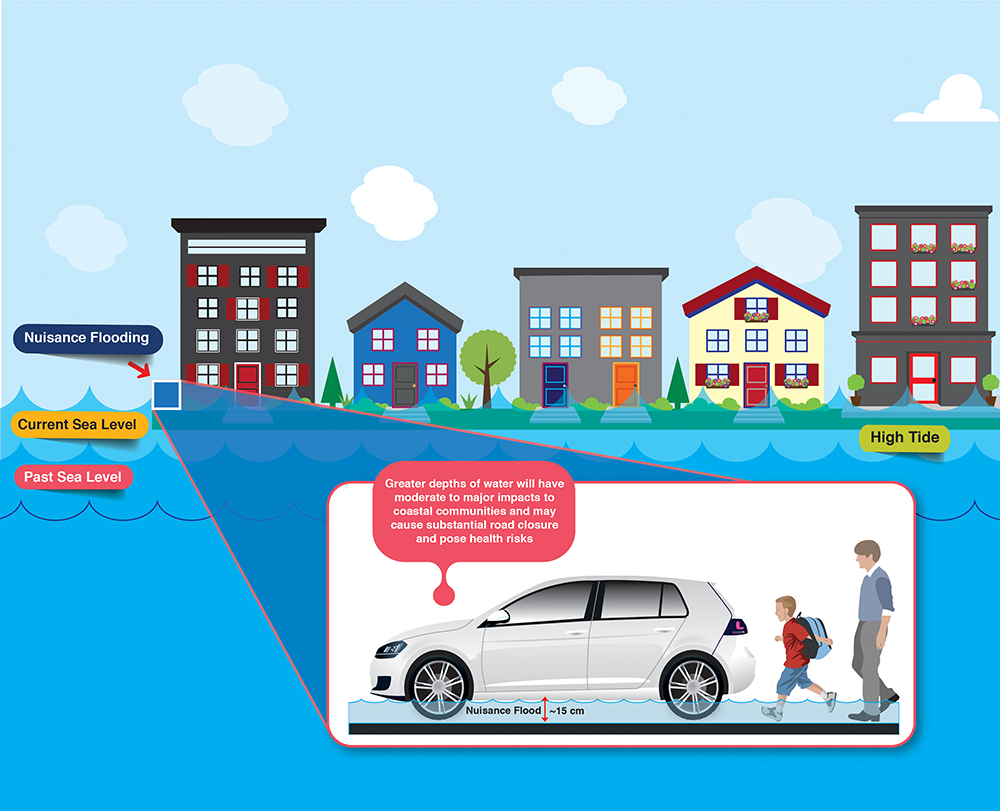 Long-term impact of climate change on US cities is rising, UCI researchers find

Feb. 21, 2017 - Global climate change is being felt in many coastal communities of the United States, not always in the form of big weather disasters but as a steady drip, drip, drip of nuisance flooding.

According to researchers at the University of California, Irvine, rising sea levels will cause these smaller events to become increasingly frequent in the future, and the cumulative effect will be comparable to extreme events such as Hurricane Katrina or Superstorm Sandy.

“Catastrophic storms get a lot of media attention and are studied, but we wanted to know more about the non-extreme events,” said Amir AghaKouchak, UCI associate professor of civil & environmental engineering and co-author of a new study on cumulative hazards in the American Geophysical Union journal Earth’s Future.

“These diffuse floods happen multiple times a month or year,” he said. “They don’t kill anyone, they don’t damage buildings, but over time they have extremely high-cost outcomes, and it happens without us realizing it.”

In Washington, D.C., for instance, the number of hours of nuisance flooding per year has grown from 19 between 1930 and 1970 to 94 over the last two decades. Projections suggest that there could be as many as 700 hours of nuisance flooding per year by 2050. The capital’s monuments, marinas, parks, public transportation infrastructure, roads and businesses could be affected. The UCI researchers found similar potential impacts in four other American cities: Miami, New York, Seattle and San Francisco.

Climate change is driving the growth of cumulative hazards, they noted. A full moon on a clear night triggering higher tides is now enough to cause flooding, because ocean levels are so high.

“The frequency is increasing because of sea level rise,” AghaKouchak said. “We call it clear-sky flooding. There’s no rain, but if you have a higher-than-usual tide, you get flooding in these coastal areas.”

Lead author Hamed Moftakhari, a UCI postdoctoral scholar, said that people in often-hit regions have begun the process of adapting to the problem. “In a recent social science survey, people weren’t really interested in knowing the depth of the water. They just wanted to know how long they would be flooded,” he said. “Their main concern was finding out when they could get back to their schools and businesses.”

“This index gives officials a tool that could help them decide to move beyond the convenient but potentially very costly strategies of deferral and incrementalism and promote more transformative policies where they make sense,” Matthew said.

Co-author Brett Sanders, UCI professor of civil & environmental engineering, added: “The index is particularly useful for predicting future hot spots for nuisance flooding across the U.S., where adaptation measures are needed the most.”