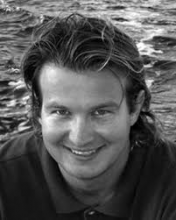 Abstract: For the Office of Naval Research-funded Heterogeneous Adaptive Maritime Mobile Expeditionary Robots (HAMMER) project, we work on cooperative autonomy for a fleet of unmanned vehicles working together in the aerial, water surface and underwater domains.  Each of these systems work well independently, but our goal is to integrate their performance into one system of vehicles that can safely perform cooperative tasks. The challenges include creating reliable communications links between vehicles in the harsh low-bandwidth maritime environment, integrating novel onboard sensors and inter-vehicle communication to create filters to estimate the state of the network, and creating autonomous takeoff-and-landing algorithms between the aerial/underwater vehicles and the surface "mothership" vehicle. The surface vehicle is envisioned to be capable of transporting the aerial and underwater vehicles as well as providing mission-lengthening power. Possible applications of this system include automated deployment and recovery of data-collecting unmanned underwater vehicles and an ad hoc wireless network where the aerial vehicle relays time-sensitive data collected from the surface or underwater vehicle to a human on a ship many miles away. In a separate but related project, we are also determining human-autonomy teaming required for future Naval programs, assessing the state-of-the-art algorithms, and creating open challenge problems to academia to fill gaps based on the Navy's need.

Bio: Vladimir Djapic earned bachelor's and master's degrees from UC San Diego in 2000 and 2001, respectively, and a doctorate from UC Riverside in 2009, all in electrical engineering. He is a chief scientist and a lead principal investigator (PI) for projects that utilize maritime autonomous systems (air, surface, and subsurface) at the Unmanned Maritime Laboratory in Space and Naval Warfare Systems (SPAWAR) Center Pacific in San Diego. Djapic is also leading numerous international collaborative efforts, for example, next-generation autonomous systems (NGAS) with multiple international partners and the Coalition Warfare Program (CWP) with Croatia. From 2008 to 2013, he worked at the Center for Maritime Research and Experimentation (CMRE), former NATO Undersea Research Centre (NURC), La Spezia, Italy, and served as a scientist-in-charge for five major NATO sea trials that involved two CMRE ships, as well as shore-lab experiments set-up with heterogeneous autonomous robots: autonomous surface and underrwater vehicles (ASVs and AUVs). The objective of his research effort at CMRE was to design an inexpensive but robust and effective autonomous mine neutralization system and perform multiple at-sea experiments. From 2002 to 2007, he worked at SPAWAR. His ONR-funded work focused on utilizing advances in navigation, control and sonar processing to exploit AUVs for complex missions, such as ship hull inspection. Djapic has served as technical director of Student Autonomous Underwater Competition-Europe (SAUC-E, sauc-europe.org) since 2010 and since 2013 as a PI for European Robotics Athlon (euRathlon, www.eurathlon.eu/site) and Robocademy (www.robocademy.eu). He has more than 50 publications at prestigious international journals and conferences and has served as an editor and reviewer during his scientific career.

Michael Ouimet received a bachelor's degree in mechanical engineering from the University of Notre Dame in 2009 and a master's degree and doctorate in mechanical engineering from UC San Diego in 2010 and 2014, respectively. He also held a postdoctoral position at UC San Diego in 2015. He is currently a research engineer at SPAWAR Center - Pacific working on autonomy for unmanned vehicles. His research interests include distributed control, multisensor data fusion, artificial intelligence and robotics.