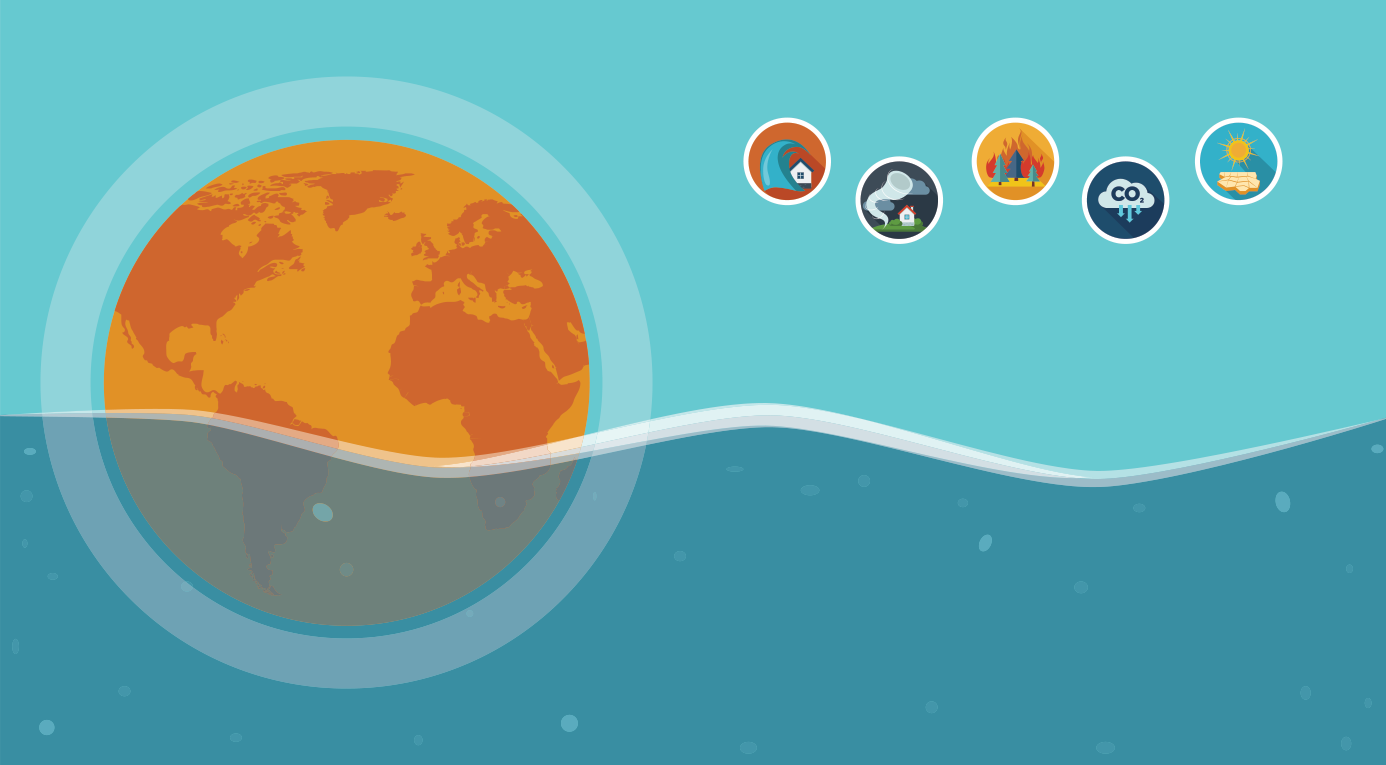 April 18, 2022 – Rising seas, increasingly powerful storms and hurricanes, intensification of wildfires and drought, widespread loss of animal and plant species, and reductions in food security. These are the looming perils on the minds of UCI researchers who are investigating climate change.

The effort to understand and find solutions to a warming planet reaches across decades and disciplines at UCI. A long legacy of environmental advocacy stretches back to 1969 when the interdisciplinary environmental engineering program began, to 1994 when the Department of Earth System Science was established as the first academic department in the world dedicated to studying climate change. And it continues today in the new Interdisciplinary Science and Engineering Building where nine researchers – five from civil and environmental engineering (CEE) and four from Earth system science (ESS) – are joining together as the CLEWS (Climate, Energy, Water Solutions) group to share their expertise and explore strategies that address the urgent threat.

“Climate change is jeopardizing livelihoods and infrastructure, and fueling economic and social unrest around the world,” says Efi Foufoula-Georgiou, Distinguished Professor of CEE and one of the group’s founding members. “The question is no longer whether climate change is a threat, but what can we do about it. How can society transform and manage our energy, water,  agricultural and natural systems to reduce emissions and adapt to climate change? With this formalized interdisciplinary group, we aspire to tackle these important challenges and propose solutions.”

CLEWS researchers are investigating ways to better manage greenhouse gas emissions and transition to renewable energy; improve forecasts of the hydrologic, wildfire and ecological impacts of a shifting climate; and design equitable and sustainable strategies to confront climate change. They are drawing on recent advances in machine learning and artificial intelligence to obtain information flows from satellites, sensor networks, models and other sources.

In one such cross-disciplinary project, Kristen Davis, CEE associate professor, and Steven Davis, Earth system science professor, are working to assess the global potential of sequestering carbon through large-scale cultivation of seaweed.

Seaweed, or macroalgae, is increasingly being recognized as a means to slow climate change due to its ability to offset carbon, be a sustainable food source and present regenerative properties for ocean ecosystems. Offshore seaweed farming has potential to become a thriving marine biomass industry for the production of fuels, chemicals and food. The researchers have developed a global dynamic model to estimate seaweed growth and carbon harvest. They are testing biological parameters to determine the most realistic and sustainable approach.

She says the partnership with Earth system scientists is important. “Collaborative work between ESS and CEE allows us to combine a deep understanding of the Earth systems with engineering solutions to fight climate change.”

Brett Sanders, CEE professor, also conducts research with Steven Davis. Together they are studying flood risk across the Los Angeles Metropolitan region, which is exposed to dangerous high velocity flooding with mud and debris based on steep topography and tall mountains that surround developed areas. With funding from the National Science Foundation, the project employs advanced simulation systems to gain a deeper understanding of how risks are distributed geographically, whether disadvantaged populations are disproportionately impacted and what infrastructure investments and policy reforms offer the best options for managing risks.

“Different disciplinary backgrounds bring different skill sets and different perspectives on how problems are defined, what’s valuable to study, and the role of technology innovation, which is where engineers are especially strong,” says Sanders, who holds a joint appointment in urban planning and public policy and often works with social scientists. “Engineering innovations are often most powerful when applied in an interdisciplinary context. My expertise in flood simulation, for example, could fall flat without an understanding of who is impacted by flooding, what decisions they face, and what factors they are weighing as they try to push ahead.”

Another example of a successful interdisciplinary project is research published last year by Foufoula-Georgiou and James Randerson, the Ralph J. and Carol M. Cicerone Professor in Earth system science. Working together with a CEE doctoral student, they found that the tropical rain belt – a narrow band of heavy precipitation near the equator – is projected to shift unevenly, a change that could threaten water availability and food security for millions of people around the world.

Randerson explained that climate change causes the atmosphere to heat up by different amounts over Asia and the North Atlantic Ocean. “We know that the rain belt shifts toward this heating, and that its northward movement in the Eastern Hemisphere is consistent with these expected impacts of climate change.” He added that the weakening of the Gulf Stream current and deep-water formation in the North Atlantic is likely to have the opposite effect, causing a southward shift in the tropical rain belt across the Western Hemisphere.

“The complexity of the Earth system is daunting, with dependencies and feedback loops across many processes and scales,” says Foufoula-Georgiou. “Our work combines the engineering approach of systems thinking with data analytics and climate science to reveal subtle and previously unrecognized manifestations of global warming on regional precipitation dynamics and extremes.”

Foufoula-Georgiou and Randerson are currently working together on NSF-funded research looking at the application of mathematics to climate prediction as well as on a NASA-funded project to improve wildfire prediction.

“I was interested in joining the CLEWS group because on the engineering side, our colleagues studying global environmental issues have really strong analytical skills that can help us find solutions to some of the most difficult climate problems,” says Randerson.

“Collectively, we have really high impact. Much of our work is highly cited, in part because we are taking interdisciplinary approaches to really important issues.”

For some of the complexities surrounding wildfires, Randerson is teaming up with Tirtha Banerjee, CEE assistant professor. They have two projects: One is building a global constellation of satellites to improve fire detection and another is a collaboration to measure the composition and origin of smoke particles. “Tirtha is allowing an ESS student working with me to measure fuels and smoke at the experimental burning he is planning in the Sierra Nevada mountains early this year,” he explains.

Banerjee looks at the physics of how wildfires behave, and he proposes solutions through smart landscape engineering and prescribed burns. He says the close proximity of colleagues, students and postdocs as well as informal discussions are all helpful for fostering creative alliances, and he is taking advantage of the new CLEWS hub in the ISEB, with multiple joint efforts. In addition to his projects with Randerson, he is working with Foufoula-Georgiou to investigate fire-atmosphere interactions and the global climatology of fires. With Sanders, he has a project to quantify post-fire flood risks facing communities protected by civil infrastructure that is prone to clogging due to mud and debris flow. With Michael Goulden, ESS professor, he is examining the spatial analysis of wildfire fuels in California.

Goulden is director of the Center for Ecosystem Climate Solutions and conducts research on how earthly ecosystems work, with an emphasis on what controls the exchanges of gases and energy between land surfaces and the atmosphere.

“I’ve always sought to combine the tools of engineering and physics to the problems relevant to environmental science,” Banerjee says.

Vrugt uses theory, computer models and data to understand, describe and predict behavior of complex systems. “Climate change has so many different aspects related to it that a single discipline alone cannot tackle the overall challenge,” says Vrugt. “The environment and how we deal with planet Earth and our own behavior needs to change; this requires coordination and integration.” 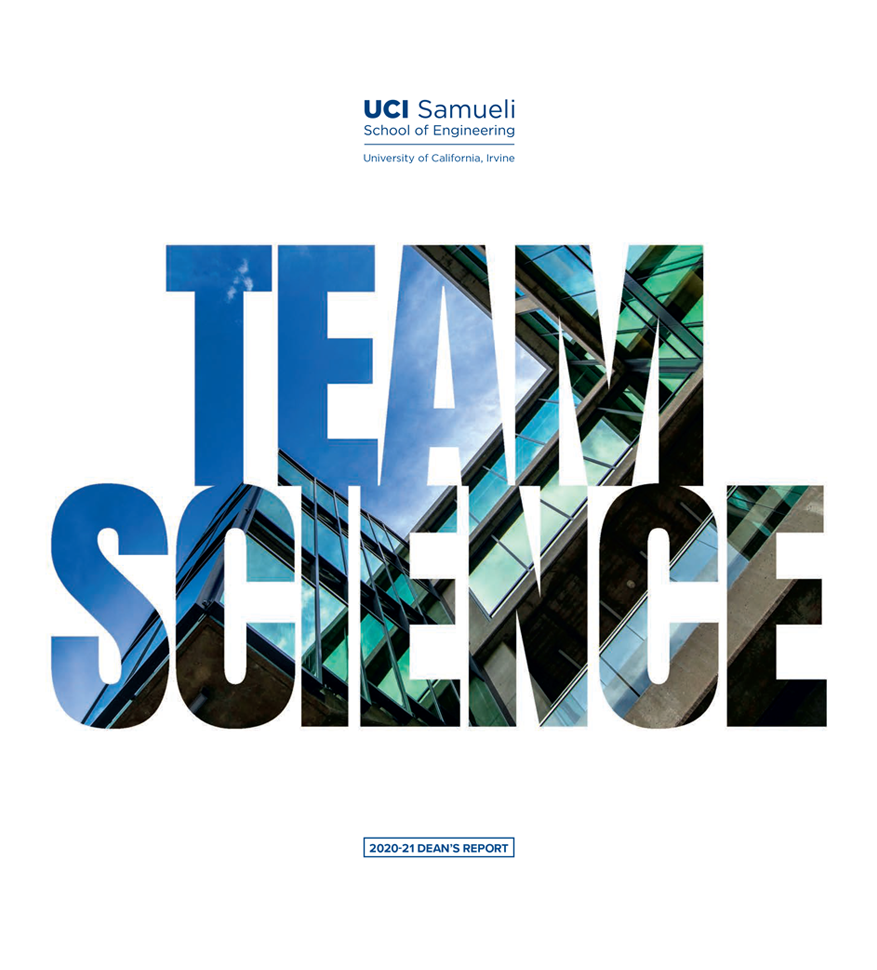