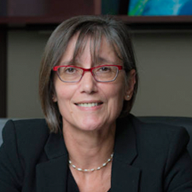 Efi Foufoula-Georgiou is a Distinguished Professor in the Department of Civil and Environmental Engineering at the Henry Samueli School of Engineering, University of California, Irvine. From 1989-2016 she was on the faculty at the University of Minnesota as a McKnight Distinguished Professor in the Department of Civil, Environmental and Geo-Engineering, the Joseph T. and Rose S. Ling Chair in Environmental Engineering and a Founding Fellow of the Institute on the Environment. She has served as director of the NSF Science and Technology Center “National Center for Earth-surface Dynamics” (NCED) and director of the St. Anthony Falls Laboratory at the University of Minnesota. She received a diploma in civil engineering from the National Technical University of Athens, Greece, and an M.S. and Ph.D. (1985) in environmental engineering from the University of Florida. Her area of research is hydrology and geomorphology, with special interest on scaling theories, multiscale dynamics and space-time modeling of precipitation and landforms. She has served as associate editor of Water Resources Research, J. of Geophysical Research, Advances in Water Resources, Hydrologic and Earth System Sciences, and as editor of J. Hydrometeorology. She has also served in many national and international advisory boards including the Water Science and Technology Board of NRC, NSF Advisory Council for Geosciences, NASA Earth Sciences Subcommittee, and EU advisory boards, as well as a member of several NRC studies. She was the chair of the Board of Directors for CUAHSI (Consortium of Universities for the Advancement of Hydrologic Sciences) and a member of the Board of Trustees of UCAR (University Corporation for Atmospheric Research). Foufoula-Georgiou is currently a presidential appointee to the Nuclear Waste Technical Review Board and the elected president of the Hydrology Section of AGU. She has been the recipient of the John Dalton Medal of the European Geophysical Society, the Hydrologic Sciences Award of AGU and the Horton Lecturer of AMS. She is a fellow of the American Geophysical Union and American Meteorological Society, and a member of the European Academy of Sciences.

Hydrology and geomorphology with emphasis on modeling the interactions between the atmosphere, land and the terrestrial environment at plot to large-watershed scale