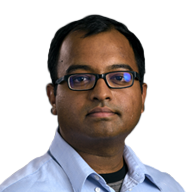 Banerjee received his bachelor of science degree in civil engineering from Jadavpur University, Calcutta, India in 2011. During his undergraduate studies, he conducted research in the areas of structural dynamics and aerospace engineering in India and Germany as a DAAD (German Academic Exchange Service) Fellow. Upon completion of his undergradate studies in 2011, he moved to the U.S. and joined Duke University in Durham, NC, as a Ph.D. student and conducted theoretical, numerical and experimental studies involving environmental fluid dynamics and turbulent flows. He received his Ph.D. in 2015 and joined Karlsruhe Institute of Technology (KIT) in Germany for postdoctoral research in atmospheric boundary layer dynamics. He relocated to the U.S. in early 2017 to join Los Alamos national Laboratory (LANL) in New Mexico and started working on wildfires, ecosystem disturbance as well as wind energy resources. At LANL he received a Chick Keller Postdoctoral Fellowship in 2017 and a Director’s Fellowship in 2018. He currently serves as an associate editor of the journal Earth Systems and Environment (Springer).

Exchange of scalar (such as carbon dioxide, heat or trace gases), momentum and energy between the atmosphere and the elements of the ecosystem such as land, vegetation and water is controlled by turbulence or multi-scale organized eddy motions. The Boundary Layers and Turbulence (BLT) lab led by Banerjee will use a range of novel theoretical, numerical and experimental tools to identify the governing laws of such interactions across a wide range of spatial and temporal scales.