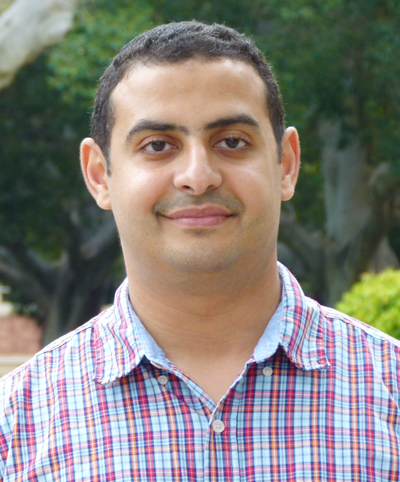 Aug. 3, 2021 – How do we make artificial intelligence (AI)-controlled cyberphysical systems like self-driving cars, drones and smart cities safer? Yasser Shoukry, UC Irvine assistant professor of electrical engineering and computer science, dedicates his research to this complex question. For his efforts, he has won the 2021 IEEE Technical Committee on Cyber-Physical Systems Early-Career Award.

Each year, the IEEE TCCPS Early-Career Award recognizes a junior researcher from academia or industry who has demonstrated outstanding contributions to the field of cyber-physical systems (CPS) in the early stage of their career. This year’s selection committee highlighted Shoukry’s ‘‘contributions to the theory and design of safe learning-enabled cyberphysical systems.’’

“He is a rising star in the area of provably safe, learning-enabled, cyberphysical systems,” wrote Pramod Khargonekar, Distinguished Professor of electrical engineering and computer science and vice chancellor for research, in his nomination letter.

Khargonekar noted Shoukry’s research in formal verification of neural network-controlled cyberphysical systems, attack-resilient cyberphysical systems and novel decision procedures for the design and analysis of complex CPS. He also spotlighted Shoukry’s “impressive record of high-quality publications with more than 1,500 citations at this early stage of his career. His papers appear in top-tier journals and conferences. They demonstrate high creativity, mathematical rigor and real-world relevance.”

“I clearly saw that Yasser has all the potential to be successful moving forward, to be independent and to make UCI proud,” added Mohammad Al Faruque, associate professor of electrical engineering and computer science and winner of the 2018 IEEE TCCPS Early-Career Award. “He deserves it. He has made fundamental contributions in the intersection of formal method, machine learning, control and security.”

AI and machine learning (ML) are increasingly being used to control physical systems around us, explained Shoukry. Self-driving cars, drones and smart cities are some examples of cyberphysical systems that are dependent on machine learning. These systems are safety critical. A wrong decision made by AI/ML agents, like artificial neural networks, can lead to catastrophic consequences.

“My research aims to provide novel mathematical techniques and algorithms to check that these neural networks will always make correct (or safe) decisions,” Shoukry said. “What makes the problem challenging is that neural networks are highly complex and typically treated as black-box components with behaviors that are hard to interpret and understand.”

Another complexity is that these neural networks control physical systems, and the behavior of the overall system depends on both the physical properties of the system as well as the complex neural network.

“Our research provides algorithms that can simultaneously analyze neural networks and physical systems to provide a scientific basis to understand the fundamental properties of these ‘learning-enabled cyberphysical systems’ and guide their design,” said Shoukry.

The impact of Shoukry’s research is far-reaching. He explained that regardless of the explosion in the use of machine learning and neural networks within a multitude of domains, these learning-based systems can fail in several, safety-critical, situations leading to human fatalities.

“Recent polls show that societal rejection of these technologies increases significantly with every failure leading to more than 75% of Americans being too afraid to ride in a self-driving vehicle and 64% afraid from sharing the road with autonomous cars,” he said. “Such safety and reliability concerns, if not proactively addressed, will pose a significant societal barrier of adopting these technologies permanently. My research aims to alleviate these concerns by providing mathematically rigorous and algorithmically efficient techniques to verify the safety of these systems.”

“I think the type of work Yasser is doing is extremely important,” said Al Faruque. “Especially for autonomous vehicles and machine learning, he’s basically trying to verify these things – knowing the unknowns – before they’re deployed. He’s trying to analyze the systems and tell us that they will perform the way they should, especially the systems that directly impact humans like cars and drones.”

Shoukry said, “With the critical importance of cyberphysical systems in building the next generation of safety-critical systems (e.g., autonomous vehicles, industrial automation, advanced manufacturing, smart cities and medical devices), I am really thrilled that my research is being recognized as it will impact such an important field that may affect the lives of millions of people.”