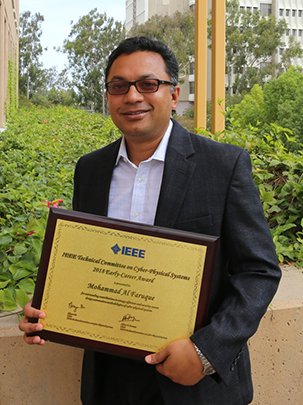 July 11, 2018 - Mohammad Al Faruque, Samueli School associate professor of electrical engineering and computer science, has received for the second time in two years an early career award from an IEEE committee or council.

Last month, he won the 2018 IEEE Technical Committee on Cyber-Physical Systems Early Career Award, which recognizes a researcher who has received a doctorate within the last 10 years, for demonstrating outstanding contributions to the field of cyber-physical systems. Al Faruque was honored for his work over the past eight years in the areas of energy-efficient and security-aware design automation methodologies for cyberphysical systems.

“I am very honored and happy to receive this prestigious award,” Al Faruque said of his most recent accolade. “Thanks to IEEE for recognizing my multidisciplinary research from two different research communities.”