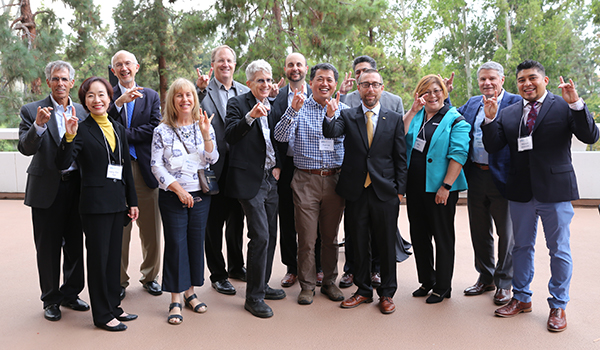 Oct. 22, 2021 – In a series of three in-person events this month, Magnus Egerstedt, the Stacey Nicholas Dean of Engineering, introduced himself to different segments of the Samueli School of Engineering community, sharing his background and his vision for the school’s future.

“I’ve been the new dean now for three months, and it’s been quite remarkable. I’ve felt welcomed by the faculty, staff and the broader community,” said Egerstedt, who considered the meet and greet events as an opportunity to set the stage for future interactions with internal and external stakeholders.

On Oct. 6, Egerstedt met with about 40 guests from the external community, including Engineering Dean’s Leadership Council members, Hall of Fame inductees, donors and industry supporters, on the lower Engineering Plaza.

Henry Samueli introduced Egerstedt, saying, “The school has made amazing progress in the past 20 years since I moved to Orange County.” He noted the increases in faculty hiring, student quality, resources and new buildings on campus, including the new Interdisciplinary Science and Engineering Building (ISEB). “It’s just wonderful to see this immense progress.

“But we’re nowhere near finished,” Samueli added. “That’s the beauty of it. This is still a relatively young school and a lot of opportunity is ahead of us. I know Magnus is very excited from the conversations I’ve had with him over the last couple of months.”

Samueli expressed his support directly to Egerstedt, “Magnus, I promise I’ll be your partner and stand by your side and work with you in any way you need me to help take the school to the next level.”

Egerstedt thanked Samueli and the external community for all past, present and particularly future support. He also highlighted the need to partner with others in the community, alumni and across disciplines.

This interconnectedness is what he believes is the soul of UCI. “The chair of chemical and biomolecular engineering Vasan [Venugopalan], he walked me out to the middle of [Aldrich Park] and said, ‘Here is the soul of UCI.’ And I really love that.

“At other universities, in the middle of the university you have a campanile, or a statue, or an administrative building, or a quad or something. Here, we have a park. Every discipline is connected through a short stroll through nature. And that, I think, is remarkably impactful.”

Egerstedt’s ideas about interconnection resonated with many community members.

John Tracy, Ph.D. ‘87, alumnus, philanthropist and former Boeing executive, said, “I’m very excited about the future of UCI under Dean Egerstedt. I believe he understands the great opportunity that the school has to make an impact on the entire community, especially the local underserved community. I’ve spoken with him, and he’s committed to making an impact on the entire community. It’s close to my heart, and I believe it’s close to his too.”

“He’s got a phenomenal background to advance UCI in the multitude of areas of engineering that continue to make progress here -- not only to serve our community but enhance the status and capabilities of UCI,” said Stanton Rowe, CEO of NXT Biomedical and corporate vice president of Advanced Technology at Edwards Lifesciences. “I’ve been connected with the biomedical engineering group for about 15 years, and I’ve really enjoyed watching that group advance. I’m sure with the support that Magnus brings, it will continue to do so.”

A week later, on Oct. 13, Egerstedt met with approximately 100 faculty and staff on the new Interdisciplinary Science and Engineering Building courtyard. Athina Markopoulou, electrical engineering and computer science chair and professor, introduced Egerstedt, who is in the EECS department.

“I’m very excited about our new dean,” Markopoulou said. “I think he’s the right person at the right time to take our school to the next level. I think that he has done a wonderful job in the few months that he’s been here. He’s managed to meet with everyone and really understand the pulse and potential of UCI.”

She added, “I’m particularly excited because his research area of control and robotics is within the intellectual realm of my department, so it’s exciting to have a dean who is not only an administrator to us, but also a researcher among our faculty.”

“I see a lot of energy in the new dean,” said Sunny Jiang, chair and professor of civil and environmental engineering. “He is not just bringing what he’s used to into this school. He is listening to find out what the needs are here, so that is a very exciting approach. His heart is in the right place. He wants the school to do well, to do better. He’s really thinking about strategies. I think we are only going to be better. I’m excited about the future of the school of engineering.”

Egerstedt finds connections in his robotics research, “I’m really interested in how to get large teams of small robots to work together on tasks that no individual alone could solve.” He also shared his lifelong love of soccer, drawing parallels to his position of attacking midfielder on the soccer field to his role as dean: “What I love about that position is you’re surrounded by people -- defenders, attackers and you get to be part of building up plays, you get to play defense, you get to orchestrate things, you get to assemble these gorgeous triangles and squares that really make the plays unfold. And I’ve discovered that what I love about being an attacking midfielder is...  I get to be part of these bigger things that I couldn’t do by myself.

“I think the dean’s job is like being an attacking midfielder. You guys are going to score the goals. My job is to set up the right triangles and squares so that we get there. And every now and then, swoop in and slide tackle someone that’s trying to do something weird. I think this is an apt metaphor because being a dean or running a school is ultimately a team sport… And we really have a spectacular team.

“We have amazing people here,” said Egerstedt. “Our faculty and staff are absolutely world-class. Our students are phenomenal. I learned that 50% – at first I thought it was 15% – of our undergrads are first-gen students. And 30% are Hispanic. These are profoundly impressive numbers, and what I love is that we’re doing really well because of this. We’re thriving because of our differences and the fact that we embrace diversity head on and that is a strategic advantage.”

Those phenomenal students “go on and do amazing things and make the world a little bit better” as alumni. A week later, on Oct. 20, Egerstedt met with approximately 40 of those alumni and students, who gathered for a mixer of the Engineering Alumni Society and Engineering Student Council at UCI Beall Applied Innovation (The Cove).

Egerstedt’s dedication to students inspires alumnus Marvin Maldonado ‘06, interim director of the Stacey Nicholas Office of Access and Inclusion: “I’m excited about Magnus’s energy and his commitment to students, which is my personal passion. As an alum, it’s exciting to be on this side of things. I was that student. With the support of staff, I benefited from their help and services. Magnus is 100% behind supporting students. Seeing his energy and interactions and engagement with students is very exciting.”

After spending 20 years at Georgia Tech, Egerstedt said, “I started to feel that we were missing some of the big defining questions of our time. And I really started looking for a place where collaborative research was part of the DNA. Where it seemed to be built around this kind of collaborative vibe. But I was also looking for a place that was hungry. A place that didn’t seem to be completely done.” He found UCI “was firing on all cylinders.

“I’ve got to say that UCI is a really strong brand,” said Egerstedt. “People care deeply about this place. There is a willingness to band together and do big things and I’m really, really excited about being given this opportunity to play a small part in pooling all of us together and reaching the next gear.”

The sentiment rang true for Ramin Massoumi ‘94, Hall of Fame inductee, Iteris senior vice president and general manager, and alumnus in civil and environmental engineering: “In his speech, Magnus said it so perfectly. UCI is one of those organizations that historically has never been happy with where they are. They’re always trying to achieve, always striving for bigger, better, higher elements. They say, ‘UCI is under construction indefinitely.’ And I think that’s a great trait. It shows that the university is continuously building. It’s a sign of their ability to remain agile, so as industry changes, as new technologies come on board, as perspectives change, the university has adapted very nicely to it. I remember when I was here as a student, you felt that attitude and you still feel it.”

He added, “I really think that having someone like Magnus on board – you can see it in his passion, the way he presents his experience and his background – that his personality and style are very much in sync with UCI. And that’s what makes it so exciting.”