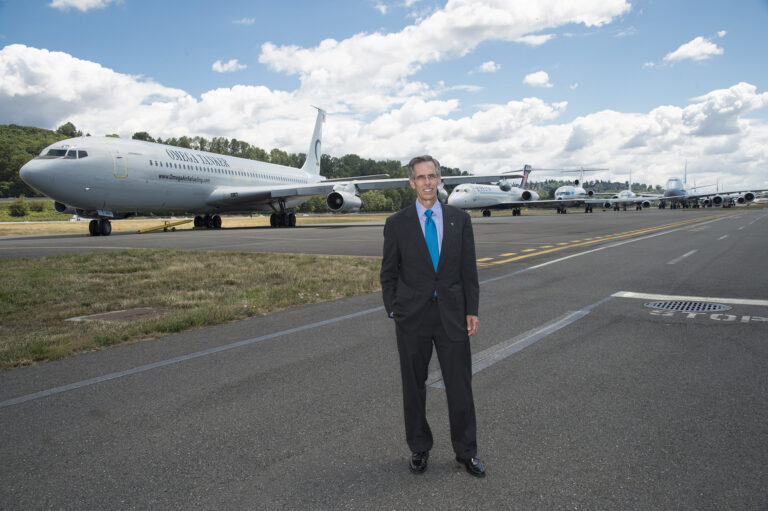 July 6, 2021 - There are two very different types of jobs at Coca-Cola, Victoria Alegria Tracy told her son, John, as they visited the bottling plant in Los Angeles when he was a child: In one, you watch the bottles go past on an assembly line and verify the level of liquid in them – and get paid near-minimum wages. In the other, you wear a white lab coat and determine the chemistry of the liquid – and receive a sizable salary.

She made clear that if John wanted the second kind of job, he would need a good education.

Victoria Tracy had a sharp mind but had never gone to college because her family couldn’t afford it. She came from humble origins, growing up in a Spanish-speaking home in Boyle Heights and marrying a man whose pursuit of higher education was prevented by World War II. She got her first job at age 55 when her husband retired – and then worked for the next three decades as a real estate developer.

In the years after that visit to the Coca-Cola plant, John Tracy latched onto a dream of becoming a scientist, first earning a bachelor’s degree in physics at California State University, Dominguez Hills; then a master’s degree in physics at California State University, Los Angeles; and, in 1987, a Ph.D. in engineering at UCI. He spent an illustrious career at Boeing, where he eventually was put in charge of the entire engineering department of 55,000 people and the manufacturing department of 45,000.

Enabling others’ success
At a meeting a few years ago in Chicago, Tracy spoke with UCI Chancellor Howard Gillman, who mentioned that the university is now officially a Hispanic-serving institution. The federal HSI designation is awarded to schools where at least 25 percent of undergraduates are Latino and at least half of all students receive financial aid. UCI’s commitment to Hispanic students convinced Tracy that he needed to give back. He knew from personal experience the difference that higher education can make for Latino families.

“In my work at Boeing, I saw firsthand how a kid from an underserved community can dramatically change the life of an entire family overnight when they get their first paycheck in a technology field,” Tracy says. “If students would pursue engineering, chemistry, physics, computer science or similar paths, it would dramatically change their lives. And the way the Hispanic community works, it would change the life of their whole family.”

Last year, Tracy donated $100,000 to UCI to create an endowed scholarship named in honor of his mother, Victoria Alegria Tracy. UCI matched the amount, adding another $100,000. From the fund, four undergraduate scholarships will be awarded each year to underrepresented students in STEM fields, based on financial need. Tracy is in the process of setting up a similar endowment for underrepresented graduate students before the end of the year.

Active in the UCI community for years, Tracy was selected in 2009 as The Henry Samueli School of Engineering’s Lauds & Laurels Distinguished Alumnus. And he has been a member of the Chancellor’s Club for three years.

Transformative teacher
From 2006 to 2016, when Tracy retired from Boeing, he was chief technology officer and senior vice president of engineering, operations and technology.

After flunking his ninth-grade algebra class, Tracy met with his teacher every day after school if he didn’t understand something. “I went from failing to getting an A in algebra and every math class after,” he says. “And that’s because of this one guy who was willing to stay with me. He wasn’t paid to be there.”

On the day Tracy received his Ph.D., he realized that if not for this one person, he wouldn’t be graduating. It took 20 years of searching, but Tracy found his former teacher and told him of the difference he had made.

Perseverance pays off
From the day Tracy earned his bachelor’s degree, he was working full time. When he was in UCI’s doctoral program, Tracy was putting in 60-hour weeks as an engineer at Boeing while raising two children with his wife.

He would depart for his job at Boeing at 7 a.m., then attend classes at UCI in the afternoon before heading back to Boeing. In the evening, he would go home for dinner and some family time and then return to UCI, where he would work in the lab until midnight. “It wasn’t easy, but the education radically changed my life,” Tracy says.

He taught at UCI for a couple terms while still employed at Boeing, exploring the possibility of becoming a professor, but ended up focusing on his career at the aerospace giant. As the company grew, Tracy grew with it, earning multiple high-level roles as an executive.

Stratospheric success was not something he would have imagined as a minority student at Gardena High School – or during his first job as a high school physics teacher. But through hard work, persistence and the support of those around him, Tracy rose to the top of his field. He urges today’s students to similarly commit to realizing their dreams.

“If you find something you like to do, you can do anything you set your mind to. You just can’t give up; I don’t care if you fail a class,” Tracy says. “UCI can give students a vision of what they can do and provides a supportive environment – including scholarships – so they can achieve what they aspire to.”

If you want to learn more about supporting student activities at UCI, please visit the Brilliant Future website. Publicly launched on Oct. 4, 2019, the Brilliant Future campaign aims to raise awareness and support for UCI. By engaging 75,000 alumni and garnering $2 billion in philanthropic investment, UCI seeks to reach new heights of excellence in student success, health and wellness, research and more.