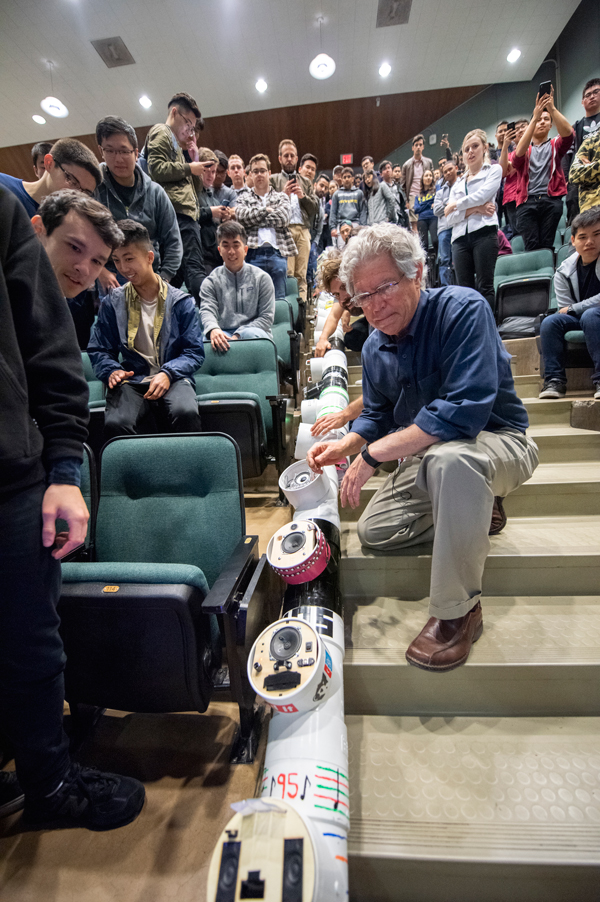 May 14, 2019 - It’s back to the drawing board for Derek Dunn-Rankin. The professor of mechanical and aerospace engineering teaches the senior design course for mechanical engineering students, and for the seventh time in the past 12 years, he assigned students the musical stack project.

The goal of this comprehensive design challenge is to work in a group to design, construct, test and then demonstrate one component of a system that will work in concert with the other components to create a unified whole. Engineering students work in teams to develop modular units that, with the drop of a steel ball, make a musical note or sequence of notes. In teams of six, they created 36 modules. The modules had to align so that the signal ball transferred safely from one module to the next via a PVC pipe. Each module needed to receive a signal from the falling ball to start and turn on an indication light, play the assigned measure of music, then release the ball quietly to the next module in the sequence at the appropriate time.

“I really enjoyed the technical features of this project and learned a lot about electronics, teamwork and understanding the design aspects of mechanical engineering,” said Jesse Villalobos, a student who served as the tech lead on his team.

The final exam involved stacking the modules together in groups of six: each group played notes from a different instrument, like in an orchestra. There were two stacks of flutes, and one stack each of oboe, clarinet, horn and bassoon. The six stacks played the song like a band, and then the students placed them all in one stack and tried to play the final song in a fully constructed tower.

The musical piece was composed specially for the class by Dunn-Rankin’s son, Christopher, a music educator and collaborative musician who has a music composition degree from the Oberlin Conservatory of Music.

Dunn-Rankin was optimistic about the success of this year’s class since a high percentage of the modules were working before the final day. However, in the end, only about 60 percent of the modules worked as they were supposed to, so the musical output was inconsistent.

“I like this project very much since it is more realistic to build components that must work well on their own but also in concert with others,” said Dunn-Rankin.  “It turned out that once again, there was an underestimation of how complicated it is to connect to other subsystems in an engineered system.”

The previous attempt of the musical stack project was in 2014. Dunn-Rankin switched projects over the next few years. He had students convert a remote-controlled (RC) speedboat to an RC tugboat. Next he tried changing an RC speedboat to a submarine; then converting an RC rock crawler into one that could climb stairs and go through water; and finally, redesigning an RC quadcopter to take off and land on water.  All of these projects start with a commercial product and require less construction.

“The problem was that none of these deconstruction/conversion projects have the orchestrated behavior of the music module. They did not require a systems orchestration; each team worked on its own to create a solution,” said Dunn-Rankin. “The benefit was that everyone had an intensive deconstruction phase, where they first had to understand the existing design before modifying it.”

Experiencing failure in engineering project design is often viewed as just as important a lesson as success. Dunn-Rankin had thought that advances in microprocessor programming, battery technology, and student fabrication skills, along with more precise module dimensions, would make the musical stack project more likely to succeed this year.

Chris Bennett, the design engineer for his team, said there were many challenges with the project. “Mainly, timing. We had to make the mechanical components work with the software to drop the ball at just the right time.”

As Dunn-Rankin reevaluates the design challenge once again, the senior students will move on to careers. The exercise of building a music module that works alone and in a stack is good practice in teamwork, which these young engineers will need in industry. Come graduation in June, Villalobos will work full-time at Northrop Grumman and Bennett will start a job at Boeing.