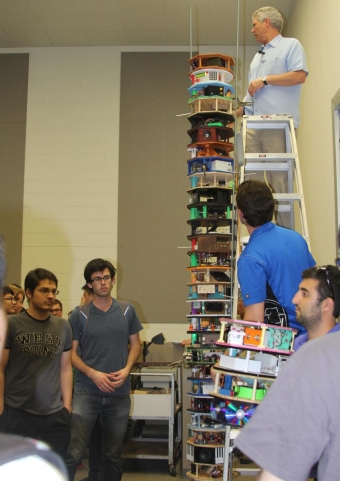 May 16, 2014 - Who knew that making music would become essential to the mechanical engineering curriculum?

For six years now, all UCI mechanical engineering seniors have taken a required course that has them designing, building and testing a music box. Not your ordinary jewelry-storing, ballerina-twirling, dresser-adorning music box, but a geometrically shaped, painted, stackable module that, with the drop of a metal ball, plays two seconds of original music. When the boxes are placed on top of one another in a tall tower, they are designed to play as a round. The first year, the assigned song was “Row, Row, Row Your Boat.”

Professor Derek Dunn-Rankin came up with the idea. Students in his class often start by deconstructing a thermo-electro-mechanical device, a hair dryer for example, to see how it works. As they move on to the musical box stack project, students are grouped into teams of four or five and assigned a number. Teams receive a set of parts that are sufficient to build a minimally functioning music box – some plywood, dowels, a microprocessor, an amplifier, wires, a switch, a servomotor and a speaker – but they are free to modify or replace any of the parts to improve the box’s performance. Although each person in the group is responsible for one element of the device, the students must all work together to create a functioning music box. Typically, there is a structures person, a programmer, one who works on lighting and servos, and someone who creates the sound and mounts components. There is overlap, but everyone has a core responsibility. 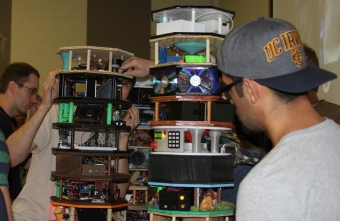 allenge for three reasons. First, it’s cooperative rather than competitive. “All of the head-to-head design competitions are great for energy and enthusiasm, but they can mistakenly encourage secretive design rather than expansive design, and it is the latter that leads to high performance,” says Dunn Rankin, Mechanical and Aerospace Engineering Department chair. “In this class, students are free, even encouraged, to learn best practices from their colleagues and to implement them.”

Second, each group is independent but still integral to the system performance. This environment replicates all complex engineering tasks: teams work as subgroups on different elements, and then use clear interface requirements to make the parts function as one.  “Any intricate device that is too complicated for a single person to design would have this feature,” he says. “System performance is the real measure of success, not the functioning of one component. What good is a high-performance engine if the wheels don't turn?”

For the past four years, Dunn-Rankin has asked his son, Christopher Dunn-Rankin (who happens to have a music compositio 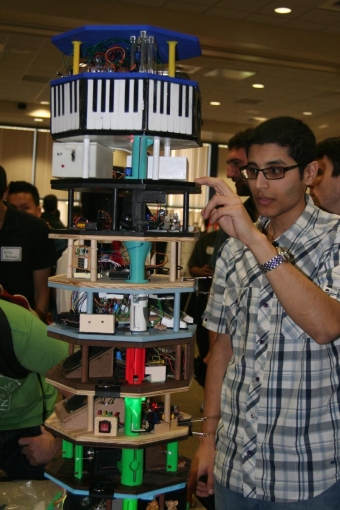 n degree from the Oberlin Conservatory of Music), to compose a piece of music to match the number of boxes being built. This year, the stack was to be 36 boxes. Christopher created a musical canon with three parts that could play in unison (three stacks of 12 boxes), or in sequence (one stack of 36).

The odds of the stack playing the whole song depend heavily on the statistics of component reliability – the third reason Dunn-Rankin likes this project. For a stack reliability of 90 percent (meaning the entire stack works nine out of 10 times), each individual box must have a 99.7 percent reliability, or fail only three times out of 1,000 attempts. It’s been a hard goal to achieve.

The moment of truth comes at quarter’s end when the teams gather in an auditorium to play their boxes individually, then in stacks of 12, and for the finale – one high-rising tower. Anticipation filled the auditorium this year as 184 students nervously waited their turn to test their boxes.

Teams tinker up to the last minute, tuning the interfaces and resolving surprise breakdowns. This year, Team 54 experienced a minor implosion the afternoon of the test. They ended up having to build a new ramp for the signal ball, which seemed to solve the problem, and their box performed well.

Team 84’s box experienced last-minute complications with fraying wires. “It has worked every time up to this point,” says Alec Andres, who worked on the interface shutter responsible for releasing the ball to the next box. “We spent so many hours trouble-shooting and trying out parts. To have it not work at the last minute kind of breaks your heart.”

This year’s projects had some improvements over past years, but some problems remained. Nearly all the boxes worked well individually (35 of 36), but interfaces caused trouble, leading to five or six points of failure in the overall stack.

Some of the student engineers attribute the lack of success to the uninspiring simplicity of the problem. When Dunn-Rankin thought up the project, he felt the same and figured that once the tower played successfully, he’d move on to a different challenge.

He’s still waiting. And next year’s class will take up a new tune as they try again.