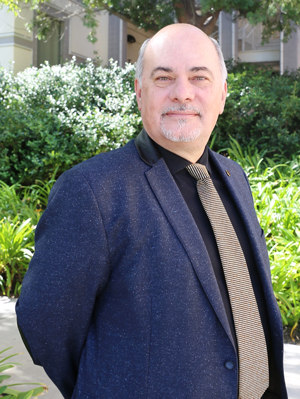 Feb. 6, 2019 - Plamen Atanassov recently joined UC Irvine’s Samueli School of Engineering as a Chancellor’s Professor of chemical and biomolecular engineering. He comes to UCI after more than two decades at the University of New Mexico, first as research faculty then as a professor in the Department of Chemical & Nuclear (and later Chemical & Biological) Engineering.

A specialist in electrochemistry, at UNM he was involved in developing electrochemical biosensor technologies for biomedical, environmental, food safety and defense applications (during 90s), and more recently, materials for energy conversion: electrocatalysts for fuel cells and electrolyzes, as well as bio-electrochemical systems for energy harvesting and water treatment.

He joined the UCI faculty in the newly formed Department of Chemical and Biomolecular Engineering in fall 2018. “There are not that many places in the U.S. that have such an exuberant level of growth like here at the Samueli School of Engineering,” says Atanassov, who is looking forward to being able to teach and draw students from a broader, more diverse population.

A prolific innovator, he has more than 30 years of experience focused on electrochemistry and energy materials research. In 1999, he spent a year and a half with a UNM spinoff company called Superior MicroPowders LLC (acquired later by Cabot Corp.), where he served as a project leader in fuel cell electrocatalyst development. In 2012, another startup company, Pajarito Powder, commenced commercialization of Atanassov’s group electrocatalyst innovations. The company has licensed a portfolio of his non-platinum electrocatalyst technologies for fuel cells and manufactures the only such products in the world based on his team’s technology.

He is a co-inventor in 50 patents and has published more than 370 journal articles. Two years ago, he was elected a fellow of the National Academy of Inventors, in the same class as Henry Samueli, the UCI engineering school’s benefactor and namesake. However, Atanassov is most proud of his part in advising 34 graduated doctoral students. “My main product is the fact that I had the opportunity to advise and lead a cohort of students who are now taking a place in our society’s research enterprise,” says Atanassov, who is originally from Bulgaria. He moved to the U.S. in 1992 after completing his education and making initial career steps there.

He explains that over the next decade or more, the pressures from climate change’s impact on the environment will require the chemical industry to move from energy intensive to energy conserving modes. “Both fuel cells and batteries are becoming important together for our transportation. In addition, electrochemical technologies can gradually replace the thermal chemical technologies. In the beginning, they will be an alternative, and then as they become economically viable, they may replace traditional methods.”

Vasan Venugopalan, professor and chair of the Department of Chemical and Biomolecular Engineering, says what impresses him about Atanassov is not only his scientific and research prominence, but also his dedication to mentorship, cultivation of personal relationships, and eagerness to contribute to the development of the new department. “His leadership and breadth of connections, as well as his insights regarding opportunities in critical areas of chemical engineering, are an amazing gift for the school. I’m excited to have his wisdom in defining the strategic vision for our department going forward.”

Atanassov likes that UCI has an “enormous concentration of exceptional people who are working in broadly defined electrochemical sciences and engineering. There is no other campus today in the country with so many electrochemists, starting with Reginald Penner, a world-known specialist in electrodeposition nano-materials electrochemistry. And moving closer to the practical world, UCI’s unique National Fuel Cell Research Center provides a vibrant atmosphere for industrial collaborations, validating the academic engineering enterprise.”

At UCI, Atanassov hopes to expand his research. “This is an amazing place for people who study cross-sections of chemistry with other sciences, such as bioinorganic or supramolecular chemistry, surface chemistry and chemical physics.  I would like to expand collaborations and enhance my research.”