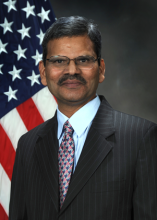 Bio: Saber Hussain is a senior toxicologist at the Airmen Bioscience Division of Wright-Patterson Air Force Base and a full affiliated professor of pharmacology and toxicology at Wright State School of Medicine in Dayton, Ohio. Hussain began his scientific career in 1987 as a toxicology research fellow at the highly regarded Indian Institute of Chemical Technology (IICT) and received his doctorate degree in 1991. Here, his novel exploration of heavy metal biotransfer between different proteins in complex biological environment led to a series of prestigious research fellowships in Italy, Switzerland and the U.S. Hussain joined the Air Force Research Laboratory at Wright-Patterson AFB in 1999. Hussain’s current research areas are on the development of a multi-organ system model that will identify the impact of stressors on pilots during a mission. Stressors can include physical exertion, high temperatures, G-forces, pressure changes, low oxygen levels and exposure to chemical contaminants. These stressors can lead to alterations on a molecular and biochemical level in the body, impacting cognition, vision, hearing, fatigue and potentially hindering performance. Hussain's specific research areas are related to stress-induced mitochondrial health and organ-level effects, quantum dynamics of electron transfer in mitochondria, and biological and physical interaction of nanoscale particles with lung surfactant (LS). He has mentored over 100 students over the last 20 years, many of whom have become scientists/professors, serving the AF in military capacity, or as civilians. His research has resulted in author/co-authorship of 150 peer-reviewed publications, several book chapters and more than 200 technical abstracts. He is an editorial member of several toxicology journals. Hussain is a Fellow of the Academy of Toxicological Sciences and a Fellow of the U.S. Air Force Research Laboratory. He serves as an expert reviewer for several government and private organizations. Hussain has been the recipient of numerous scientific awards and has established a strong collaborative network with over 25 national and international organizations.