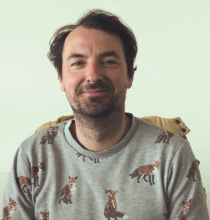 Bio: How does having dyslexia affect one’s reading comprehension? How do we process letters (signs) into messages, and what challenges may come of that work? What does a person with dyslexia notice about these challenges? And finally, what types of research methods do we use to investigate these questions?
These queries directed the evolution of Dyslexie font from an idea to a real-world application adaptable for use by those with dyslexia. We hope that Dyslexie font will improve type-font accessibility and thereby increase awareness of dyslexic and neurodivergent needs.

Abstract: Christian Boer has dyslexia himself and is a graphic designer. He is a graduate of the Utrecht Art Academy, where he first developed the Dyslexie typeface as a final thesis project. A dyslexic himself, Boer set out to create a font that would make reading a less arduous task. After completion, the revolutionary font immediately caused quite a stir among the dyslexic community and in the international media. Since winning the prestigious Smart Future Minds Award 2011 in Amsterdam, this media attention has only intensified. Among others, Scientific American, Euronews and Springwise have covered the font in their publications. In 2011, Dyslexie font won first prize at the Smart Urban Stage in Amsterdam, and was one of the most talked about presentations at TEDx Dubai - TEDx Unix - TEDx New York. Dyslexie font was a finalist for the Fast Company Innovate Through Design Award in 2012 and went on to many highlights in 2013, including a nomination for the INDEX Award of Copenhagen and the first prize in the Rabobank New Generation Pitch.