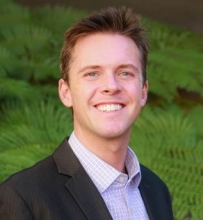 Abstract: Interfaces can direct the self-assembly of materials in unique ways that leverage new and often competing thermodynamic driving forces not found in the bulk. We use molecular simulations and theory to identify relevant interaction forces and then systematic design strategies for two such classes of materials. In the first part of the talk, we examine self-assembly as route to chiral surfaces made from achiral molecules. We show that a surprisingly simple mechanism, based only on excluded volume interactions, can drive achiral particles into chiral materials. The mechanism quantitatively explains recent experimental results, predicts new chiral-prone shapes, and suggests a way that chiral structures might emerge in nature. In the second part, we show that polymers can modulate the folding of proteins attached to an interface in ways distinct from bulk. Simulations reveal that conjugating a polymer to a model protein sometimes stabilizes and sometimes destabilizes the native helical fold, in an apparent non-intuitive manner depending on the precise attachment point. We show that these unexpected results are actually well-understood in terms of a simple theory that accounts for the entropy of the polymer near an impenetrable surface.

Biography: M. Scott Shell is an associate professor of chemical engineering at the University of California Santa Barbara. He earned his B.S. in chemical engineering at Carnegie Mellon in 2000 and his Ph.D. in chemical engineering from Princeton in 2005, followed by a postdoc in the Department of Pharmaceutical Chemistry at UC San Francisco from 2005-07. Shell’s group develops novel molecular simulation, multiscale modeling, and statistical thermodynamic approaches to address problems in contemporary biophysics and soft condensed matter. Recent areas of interest include self-assembled peptide materials, nanobubbles, hydrophobic interfaces, electric double layers, and two-dimensional colloidal particles. He is the recipient of a Dreyfus Foundation New Faculty Award (2007), an NSF CAREER Award (2009), a Hellman Family Faculty Fellowship (2010), a Northrop-Grumman Teaching Award (2011), a Sloan Research Fellowship (2012), and a UCSB Academic Senate Distinguished Teaching Award (2014).