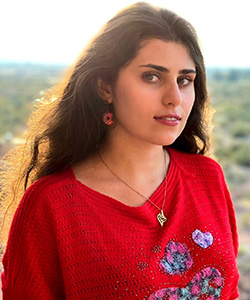 May 11, 2022 − Women in CyberSecurity (WiCyS) is an organization that addresses gender disparity in cybersecurity by advocating for women to obtain more roles and advance in the field. An advocate of diversity, UC Irvine electrical engineering and computer science graduate student Rozhin Yasaei is the president of UCI’s WiCyS chapter. She is motivated by her firsthand experiences as an undergraduate studying electrical engineering at Sharif University of Technology in Tehran, Iran, where the female-to-male student ratio was typically 40 to 200 in her classes.

Yasaei attended the ninth annual Women in CyberSecurity (WiCyS) Conference in Cleveland, Ohio, March 17-19. At the three-day conference, attendees took part in workshops, listened to keynote speakers and gained valuable networking opportunities. The career fair featured around 200 recruiters. Yasaei noted that many who attended the fair received job interviews or offers the next day. A highlight of the conference was a career village that provided help with headshots, resume building and mock interviews.

“The panels, workshops and presentations were insightful and discussed the important security and privacy issues that are overlooked or have remained unsolved still,” said Yasaei. “As a member of the ProperData team, I found my experience at the WiCyS conference quite valuable to navigate my efforts and research. I also received mentorship and guidance in professional development that I intend to share with my colleagues and UCI WiCyS chapter members.”

One of the keynote speakers highlighted how machine learning models can be unfairly influenced by the biases of the people who develop them, and the importance of researchers taking this into account when working on algorithms.

“For example, there's a model, with an algorithm that tells a judge how dangerous the person is that they have arrested, and they show that this model has a kind of bias over Black people,” Yasaei said. “So even though someone who is Black may have committed a really minor crime, they were labeled as highly dangerous. This usually leads to the judge not letting them get out with a low bail amount.”

What differentiated the WiCyS conference from others Yasaei has attended was the welcoming atmosphere to those with different backgrounds and the overall sense of community.

“It didn't matter what level or age you were,” Yasaei said. “Everyone was really supportive and open to talking to you and helping you. They were actively trying to help people and mentor you, which was a really new and different thing from other conferences I experienced.”

Yasaei became interested in engineering through a robotics group while attending Farzanegan 1 High School in Iran where she could diverge from the typical curriculum and participate in international robotics competitions such as RoboCup. Her first involvement with cybersecurity, in particular, was a collaborative project she did at the beginning of her doctorate with Sina Faezi, another UCI graduate student studying computer engineering.

“We worked on detecting a serious security threat, called hardware Trojan, inside a chip by monitoring the power consumption and electromagnetic emissions of the chip,” Yasaei said.

Yasaei, who plans to complete her doctorate in 2023 and pursue a career in academia as a professor, is continuing her research on cyberphysical systems security under the advisement of Mohammad Al Faruque, associate professor of electrical engineering and computer science.

Currently, Yasaei is working on modeling cyberphysical systems to ensure they are secure and stresses the importance of cybersecurity in protecting our data. “There is a growing wave of cyberattacks and security breaches going on these days that threaten our safety, privacy and economy and have led to paramount financial losses.”

As for what advice she would give to other women facing difficulties breaking into the field of cybersecurity, Yasaei recommends joining clubs with like-minded people and invites everyone to learn more about UCI’s chapter of WiCyS on their website. The club is open to both undergraduate and graduate students, and hosts many events including networking mixers, panels with academic and industry professionals, Hackathon, and Capture The Flag (CTF) competitions.