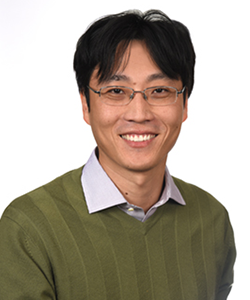 April 11, 2022 – Chang Liu, associate professor of biomedical engineering and director of the Center for Synthetic Biology, has been recognized by the UC Irvine campus with two recent honors.

Liu has been named a Chancellor’s Fellow, effective July 1, 2022. Chancellor’s Fellows are faculty with tenure whose recent achievements in scholarship evidence extraordinary promise for world-class contributions to knowledge, and whose pattern of contributions shows a strong trajectory to distinction. The campus title carries an award of up to $25,000 per year for three years in support of research.

Liu has also received a 2021-2022 Distinguished Mid-Career Faculty Award for Research from the UCI Academic Senate. The Senate Faculty Award recipients are nominated by colleagues and are for those who have achieved excellence and brought significant distinction to UCI through their research, teaching, mentorship or service to the university and community. The Senate Awards provide the opportunity for faculty to recognize the outstanding achievements of colleagues and make them and their contributions better known to the UCI community and beyond. Liu received the award in a virtual ceremony held March 9.

Liu was acknowledged for his compelling work in engineering genetic systems for rapid mutation and evolution. It is among the most prestigious awards University of California faculty members can receive from their colleagues.

"I am honored to be recognized by these awards,” said Liu. “They are a testament to the dedication and creativity of the many wonderful young scientists in my group. I am also especially touched that these honors come from my colleagues and friends at UCI. I am grateful to be in their company."

Zoran Nenadic, chair and professor of biomedical engineering, commended Liu: “Professor Liu’s groundbreaking independent work done in the last nine years since starting at UC Irvine is characterized by exceptional innovation, originality and impact. His work is published in the very top science venues and is performed by a large group of talented and well-mentored Ph.D. students and postdocs. While already impactful, his work is still in its infancy with many groundbreaking applications ahead. Professor Liu’s research is poised to blossom for years to come as it is based on powerful new ideas and concepts that his lab has developed, ones that are reshaping synthetic biology and bioengineering.”