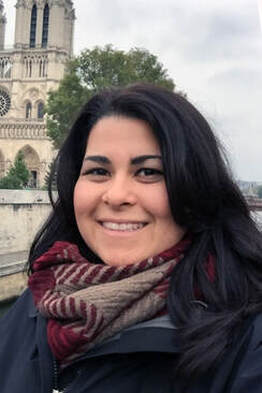 Feb. 7, 2022 – Soon after being accepted to UCI and declaring as an aerospace engineering major, Wendy Robello received an invitation to participate in the California Alliance for Minority Participation (CAMP) Summer Science Academy (CSSA) Program. The program, which continues today, prepares newly admitted UCI STEM students for the academic rigor associated with their degree programs.

“At the time, I was worried that I would be losing the entire summer after senior year of high school,” Robello said. “It turned out to be a life-changing experience, and I’ve been involved with CAMP ever since.”

​CAMP provides minoritized students with information, resources, and opportunities to increase their science identity, build community, and help them realize and maximize their full potential in STEM. Read more about CAMP in a previous CFEP: 25 Years of Impact story, here.

The preparation was particularly beneficial for Robello. A year prior, she did not plan on attending college and was instead interested in attending vocational school to prepare for a career in advertising and display art. A high school counselor encouraged her to pursue university, and helped expose her to a local university program, known as the Math & Physics Institute (MPI) at the University of Missouri, Kansas City. Here, she was introduced to physics, which Robello “immediately fell in love with.”

When describing her interests to the same counselor, Robello said she loved the challenge that physics provided, wanted to leverage her strengths in mathematics, but that she didn’t want to lose her artistic and creative sides. The counselor’s response: “Try engineering.”

Splitting her homelife in two different states as a teenager, Robello spent her academic year in the Midwest with her father and summers in her home state of California with her mothers. She decided to apply to two schools that she “remembered and had heard of,” with UCI being one of the applications.

“I come from a family of artists and musicians with a multi-ethnic background of Native Hawaiian, Filipino, Portuguese, and Native American,” Robello said. “There was no family experience with attending a university, though, and no readily accessible internet at the time to inform me of different possibilities. I knew of UCI because, growing up, I had regularly attended the E Hula Mau hula and chant competition, which the university hosted each year.” 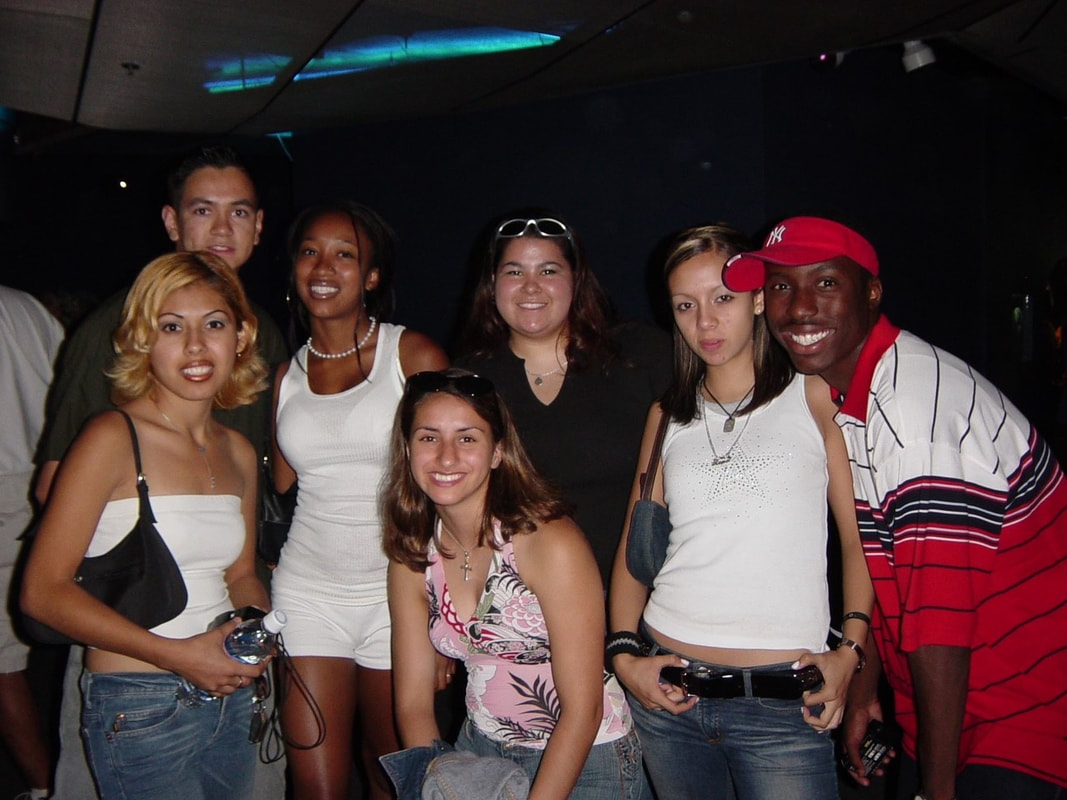 Receiving acceptance to both universities she had applied, Robello had the opportunity of meeting some of the students from Na ‘Opio O Ka ‘Aina, the Hawaii Club at UCI, influencing her decision to pursue her education at UCI.

Robello was accepted to UCI, but still didn’t have a strong understanding of what an engineer was. CAMP would help familiarize her with her new passion and supply her with all the support necessary to thrive.

“Coming in as a first-generation, 17-year-old student is quite overwhelming; let alone being a female engineering major who, at the time, didn’t really know what engineering was,” Robello said. “CAMP provided access to areas that I would not have known about. It stimulated curiosity, the art of the possible and, most importantly, it exemplified the important lesson that we succeed together.”

​A short time after attending the CSSA, Robello would serve as a CAMP mentor and tutor to fellow undergraduates, and as a CAMP Summer Research Scholar, which supports CAMP students’ research with funding and sponsorship to present at national conferences.

​“CAMP became my family away from home,” she said.

​As a Summer Research Scholar, Robello worked with Professor Emeritus James Bobrow and conducted research on pneumatic systems to support the development of military exoskeletons with the Defense Advanced Research Projects Agency (DARPA). Robello was given the opportunity to present this research at the Society for Advancement of Chicanos/Hispanics and Native Americans in Science (SACNAS) Conference. 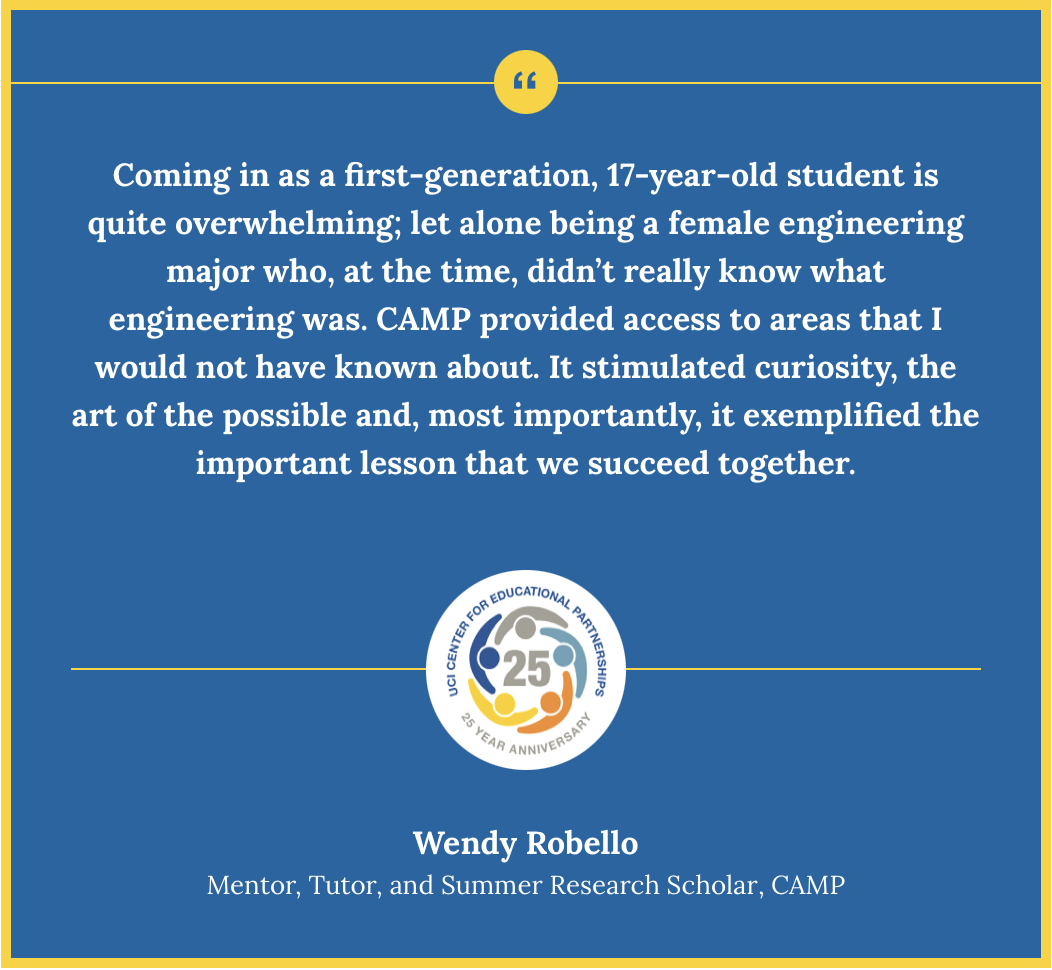 Robello began her post-college career at The Boeing Company, and she is currently the senior sector director of Systems Engineering for the Defense Systems Sector at Northrop Grumman Corporation. In the role, Robello leads long-term strategic planning and improvements in training, processes and tools to ensure engineering rigor for the over 3,500 engineers in the sector along with providing her systems engineering expertise across a diverse multi-billion dollar portfolio.

​In addition to her executive position and continued academic pursuits, Robello maintains her ties with CAMP.

In fall 2021, Robello established a scholarship for six promising CAMP students; four freshmen/sophomores and two juniors/seniors will receive $500 each, every winter quarter. She hopes that one day, the scholarship will be self-sustaining with the help of others in the community who share her passion in promoting CAMP students’ growth potential.

“It is extremely important to never forget where you came from, and it is very fulfilling to know you can reach back to help the next generations,” Robello said.

Robello also participates in CAMP events, including alumni roundtables and career discussions, and readily mentors CAMP undergraduate and graduate students. Her message throughout all the events, “Find a support system.”

“To many folks, CAMP is that support system, one that ensures students have the tools and resources to complete their degrees and achieve success,” Robello said. “Every time I come back and talk to students who are where I was 20 years ago, it breathes new life into me, to keep working hard and to keep pushing forward, knowing that we can lift each other up.

​“I will always make time to come back to CAMP.”