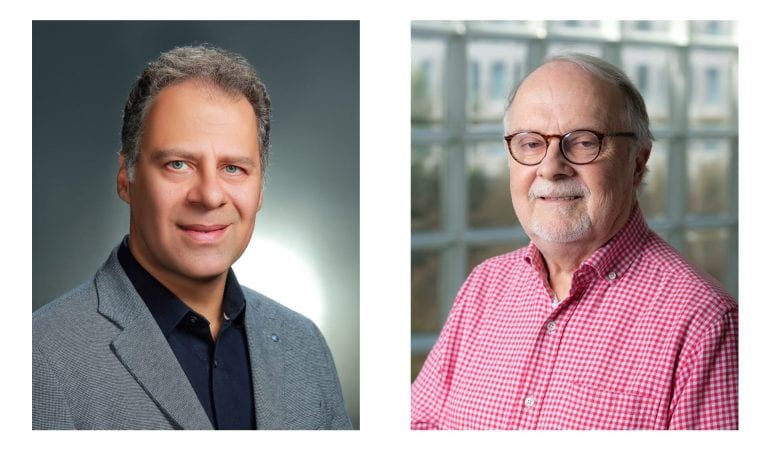 Dec. 8, 2022 - The National Academy of Inventors has named two University of California, Irvine researchers as fellows for 2022. Philip Felgner, a pioneer in the development of lifesaving mRNA vaccines, and Payam Heydari, a prolific creator of cutting-edge microelectronics technologies, were both recognized for inventions that have made tangible impact on quality of life, economic development and the welfare of society.

“Congratulations to Professors Philip Felgner and Payam Heydari on being named fellows by the National Academy of Inventors,” said UCI Provost and Executive Vice Chancellor Hal Stern. “This recognition highlights the creativity and innovation happening at UCI. Dr. Felgner’s work to support the development of vaccines and Dr. Heydari’s innovations in integrated circuit development have had major impacts on society.”

Felgner, a professor in residence of physiology & biophysics, directs UCI’s Vaccine Research and Development Center. With nearly four decades of experience in researching vaccines, gene therapies, drug delivery and epidemiology, Felgner holds 53 issued U.S. patents and 56 foreign patents; 14 total have been licensed. He pioneered a technology used in developing messenger RNA vaccines to help prevent a range of diseases, including COVID-19 and HIV. The approach may also be applicable to treating cancer, Alzheimer’s disease and genetic disorders such as sickle cell disease. Felgner won the 2022 Robert Koch Prize and Spain’s Princess of Asturias Award for Technical and Scientific Research for his contributions to the creation of mRNA vaccines.

“I am honored to have been elected as a fellow to the National Academy of Inventors,” Felgner said. “Inventions are vital to the ongoing growth, development and protection of human society, and I am proud that my own contributions are being recognized.”

Heydari, a Chancellor’s Professor of electrical engineering & computer science, is director of UCI’s Nanoscale Communication Integrated Circuits laboratory. The research group he leads has made ground-breaking innovations in the design of radio frequency, millimeter wave and terahertz integrated microchips. In a time when the semiconductor field is coming up to the limits of Moore’s Law, Heydari’s techniques and chip architectures have pushed silicon-based integrated circuits to unprecedented levels of speed and performance. His work has transformed wireless communications infrastructure, scientific imaging and sensing and the interface of electronics with living tissues, including the brain and central nervous system.

An IEEE fellow who has published more than 180 articles, Heydari is recipient of five best paper awards and two distinguished educator awards from IEEE. He holds 20 U.S. patents, of which nine were licensed to two companies and three are currently used in commercial products.

“Contribution to cutting-edge research in microelectronics with the ultimate goal of making a positive impact on society has been my objective from day one since I started my career at UCI. I feel very fortunate to be able to guide and work with the excellent members of my group in the development of new technologies to serve the public’s computing and communications needs,” said Heydari. “Being named a fellow by the National Academy of Inventors is a great honor and a highlight of my career so far.”

About UCI’s Brilliant Future campaign: Publicly launched on Oct. 4, 2019, the Brilliant Future campaign aims to raise awareness and support for UCI. By engaging 75,000 alumni and garnering $2 billion in philanthropic investment, UCI seeks to reach new heights of excellence in student success, health and wellness, research and more. The Henry Samueli School of Engineering and the School of Medicine play a vital role in the success of the campaign. Learn more by visiting https://brilliantfuture.uci.edu/the-henry-samueli-school-of-engineering/and https://brilliantfuture.uci.edu/uci-school-of-medicine/.