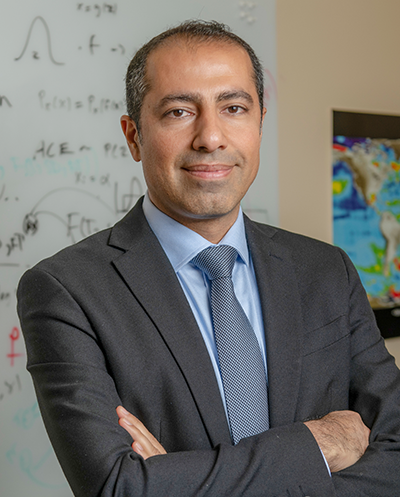 Nov. 18, 2022 - Amir AghaKouchak, professor of civil and environmental engineering, has been named to the 2022 Highly Cited Researchers global list by Web of Science group, joining 15 other UC Irvine professors on this year’s list.

This is the third year in a row that AghaKouchak has been included on this list of researchers who have distinguished themselves by publishing a large number of papers that rank in the top 1% by citation for their field and year of publication, demonstrating significant research influence among their peers.

AghaKouchak‘s interdisciplinary research crosses the boundaries between hydrology, climatology, statistics and remote sensing to address critical global water resource issues. His research focuses on natural hazards and climate extremes and their societal impacts. He is particularly interested in studying and understanding the interactions between different types of climatic and non-climatic hazards including compound and cascading events. The author or coauthor of 205 papers in publications including Nature, Proceedings of the National Academy of Sciences, Science Advances, Reviews of Geophysics, and Nature Climate Change. AghaKouchak, a California Professional Licensed Civil Engineer, has received several awards and recognitions. These include the AGU Macelwane Medal, ASCE Huber Prize, AGU Hydrologic Sciences Early Career Award, the Orange County Engineering Council Distinguished Educator Award, the Hellman Fellowship Award and the International Union of Geodesy and Geophysics (IUGG) Early Career Scientist Award.

Since 2001, the Highly Cited Researchers™ list has identified global research scientists and social scientists who have demonstrated exceptional influence – reflected through their publication of multiple papers frequently cited by their peers during the last decade.

The methodology that determines the “who’s who” of influential researchers draws on the data and analysis performed by bibliometric experts and data scientists at the Institute for Scientific Information™ at Clarivate.

The 2022 list includes 6,938 highly cited researchers in various fields from more than 70 countries and regions, including 2,764 from the U.S.