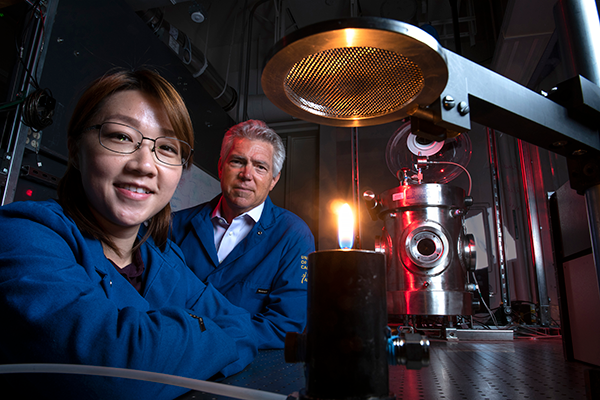 Sept. 27, 2021 - UC Irvine mechanical and aerospace engineers accomplished a major feat in 2018, when after more than 20 years of preparation, their electric-field-and-flame-interaction experiment was sent to the International Space Station (ISS) and then conducted in real-time remotely from Earth by associate project scientist Yu-Chien (Alice) Chien.

The UCI experiment, called Electric-Field Effects on Laminar Diffusion Flames (E-FIELD Flames), was led by Chien with Professor Emeritus Derek Dunn-Rankin and the NASA Glenn Research Center. As a NASA Advanced Combustion via Microgravity Experiments (ACME) project, it was designed to enhance understanding of combustion by studying flames in a microgravity environment. Since 1998, Dunn-Rankin and a succession of graduate students, including Chien, worked on the project as ground-based contributors until the ISS flight experiment was finally achieved.

The E-FIELD Flames data became available in 2020 as an asset for ground-based research as part of NASA’s open science approach to generating new analyses and scientific insights from experimental data in the space agency’s Physical Science Informatics (PSI) system. Accessible and open to the public, the PSI is a resource for researchers to data mine the information and expand upon the valuable research performed by NASA in space, using it as a research tool to further science.

This June, Chien won NASA funding ($200,000) for a simulation project using the E-FIELD data. Her project was one of five proposals, involving recognized experts in the fields of combustion science, complex fluids, fluid physics, fundamental physics and materials science, that will use PSI data and build on prior reduced-gravity research to advance fundamental research in the physical sciences.

Chien is working with Marc Day, senior computer systems engineer at the National Energy Research Scientific Computing Center. Their project will take advantage of the E-FIELD Flames experiment to simulate the behavior of a small diffusion flame under the influence of an externally applied electric field in microgravity. Chien will prepare and analyze the data for use in the simulation, and Day will create the computer code. Once validated, the simulations can be extended to Earth’s gravity. This is expected to lead to a better understanding and eventual control of hydrocarbon flames under the influence of electric fields, which can be used to extend flammability limits, reduce emissions, prevent instability and blow off, as well as modify soot production.

Electric fields can strongly influence flames because of their effect on the ions present as a result of the combustion reactions. The direct ion transport and the induced ion wind can modify the flame shape, alter the soot or flammability limits, direct heat transfer and reduce pollutant emission. The purpose of the E-FIELD Flames project is to gain an improved understanding of flame ion production and investigate how the ions can be used to control diffusion flames.

“We hope to be able to have a reliable simulation by learning from the microgravity experiment and further predict what happens when you apply electric fields to flames under different conditions,” said Chien.