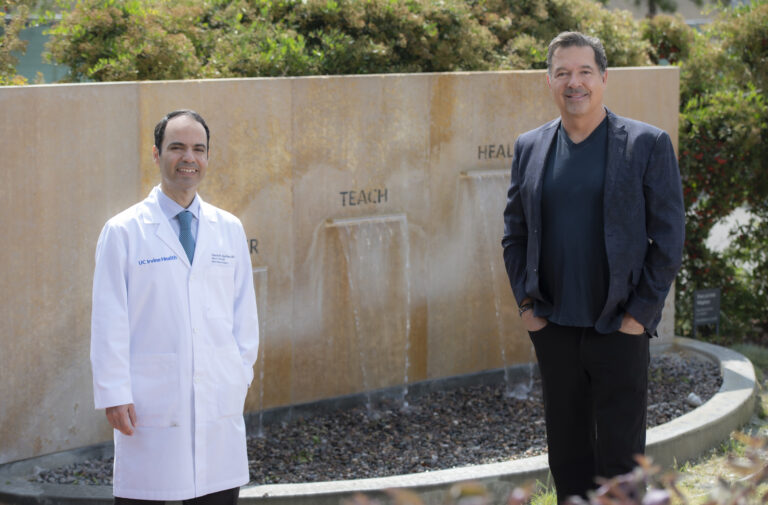 May 19, 2021 - A $1 million gift to the University of California, Irvine from Brian Fargo, founder and studio head of inXile entertainment, will advance efforts to develop a treatment for tinnitus, commonly described as “ringing in the ears.” According to the American Tinnitus Association, an estimated 50 million people in the U.S. suffer from the condition, which can interfere with the ability to work, socialize and sleep.

A UCI multidisciplinary research team, led by Dr. Hamid Djalilian, professor of otolaryngology in the School of Medicine and director of otology, neurotology and skull base surgery for UCI Health, found that electronic stimulation of the inner ear can alleviate tinnitus. Based on the success of their initial studies – which involved inserting a miniature electrode in the ear canal and through a small opening of the ear drum – the team has recently been developing an innovative implantable device that is placed behind the ear drum. Patients use a compact hand-held controller to turn electric stimulation on and off as symptoms occur and subside.

“Anyone who has the condition knows the frustration of dealing with the general lack of hope for a cure. Coming to UCI was a real breath of fresh air in a world of pessimism,” said Fargo, who is a patient of Djalilian. “I spent years researching and traveling the world looking at different solutions. One of the things that was abundantly clear was the lack of money being put into solving this problem. That’s why I’ve decided to step up and help accelerate the doctor’s work.”

Fargo’s gift is a $1 million challenge. He will match all donations one-on-one until $2 million is raised to fund the next phases of research and, ultimately, bring a device to market.

Although the exact cause of tinnitus is unclear, medical experts believe that inadequate stimulation of the cochlea – the organ in the inner ear that senses sound – or the cochlear nerve, which carries signals, causes over-sensitization of the auditory cortex, which is located in the brain’s temporal lobe and is responsible for processing sound. The result is hearing sound when there is no actual external noise.

“Outcomes so far have been very exciting, and Brian’s generous gift will help us continue this important work,” Djalilian said. “Our implantable electronic stimulation device shows great promise for bringing a life-changing breakthrough to millions of people.”