California’s Wildfire Season Has Lengthened, and Its Peak is Now Earlier in the Year 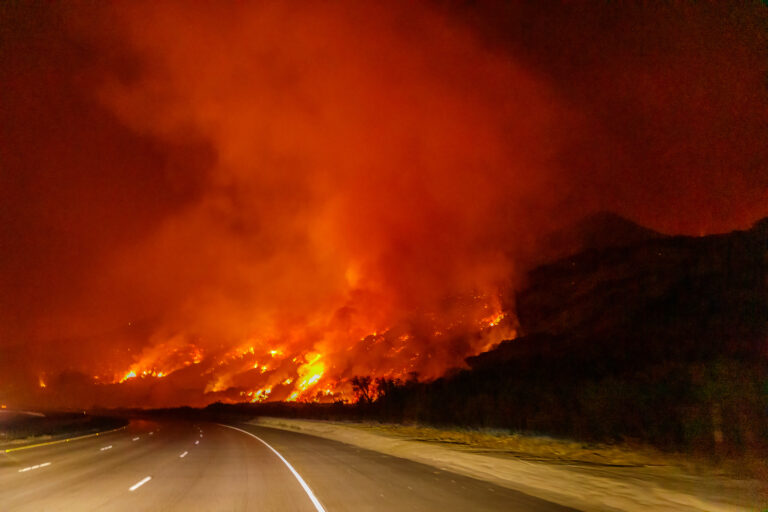 April 22, 2021 – California’s wildfire problem, fueled by a concurrence of climate change and a heightened risk of human-caused ignitions in once uninhabited areas, has been getting worse with each passing year of the 21st century.

Researchers in the Department of Civil & Environmental Engineering at the University of California, Irvine have conducted a thorough analysis of California Department of Forestry and Fire Protection wildfire statistics from 2000 to 2019, comparing them with data from 1920 to 1999. They learned that the annual burn season has lengthened in the past two decades and that the yearly peak has shifted from August to July. The team’s findings are the subject of a study published today in the open-access journal Nature Scientific Reports.

The study is a focused examination of fire frequency, burned area and myriad drivers of the catastrophically destructive events. The team found that the number of hot spots – places with severe fire risk – has grown significantly in recent years, fueled by higher annual mean temperatures, greater vapor pressure deficit (lack of air moisture), drought, and an elevated chance of blazes being sparked through such human causes as power line disruptions, construction, transportation, campfires, discarded cigarettes and fireworks.

“CALFIRE data show that each new year of the 21st century has been a record breaker in terms of wildfire damage in California,” said co-author Tirtha Banerjee, UCI assistant professor of civil & environmental engineering. “We also have seen that about 80 percent of the total number of the state’s wildfires over the past few decades have been small, measuring less that 500 acres. But when fires get large, their deadliness greatly increases.”

Banerjee said that to gain a proper understanding of the growth of fire risk in California, it’s important to put large and small incidents into separate buckets. By doing this, the team learned that 1,247 out of 6,336 wildfires, about 20 percent, accounted for 97 percent of the total burned area in the 2000 to 2020 period. 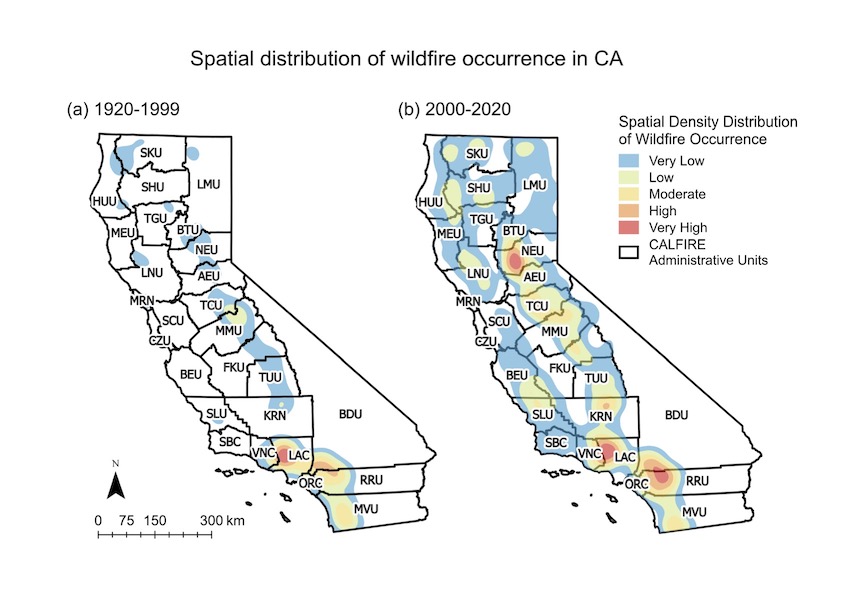 “And more than nine-tenths of the casualties and property losses can be attributed to fires exceeding the 500-acre threshold,” Banerjee said.

He added that over the past two decades, there has been a significant increase in “extreme” wildfires scorching more than 10,000 acres. Coinciding with that has been a rapid uptick in the frequency of small, human-caused blazes.

One of the most alarming findings of the study, according to lead-author Shu Li, a Ph.D. student in Banerjee’s laboratory, is the substantial spatial growth of fire risk throughout the state. From 1920 to 1999, California’s only hot spot with “very high wildfire density” was Los Angeles County. In the past 20 years, that designation has expanded greatly in Southern California to include Ventura County, and portions of Riverside, San Diego and San Bernardino Counties.

Even in northern California, areas known by fire managers as the Nevada-Yuba-Placer Unit and the Tuolumne-Calaveras Unit are newly emerged as high-density wildfire regions.

“Before 2000, there were almost no human-caused wildfires along California’s Pacific coastline, but now nearly every coastal county is experiencing increased risk, and the San Benito-Monterey Unit and the San Luis Obispo Unit have even become new hot spots,” said Li.

Many of the major fires in the northern part of the state are naturally occurring, predominantly ignited by lightning. But the majority of the increase in fire probability in recent years can be blamed on an expansion of the wilderness-urban interface. As people move into previously unpopulated areas, they bring their bad fire management habits with them.

“The concurrence of human-caused climate change, which is drying out our forests and grasslands and creating longer stretches of hot weather, and a steady influx of people into remote areas is creating conditions for the perfect fire storm,” said Banerjee. “But there is some good news in all of this; human-caused fire risk can be mitigated by better fire management practices by humans.”

He said he hoped the study and the near real-time analysis of fire risks in California’s natural environment it provides can be used by government agencies and public policy officials to both prevent and combat costly blazes.

Funding for this research project was provided by the Henry Samueli School of Engineering at UCI and the UC Office of the President.