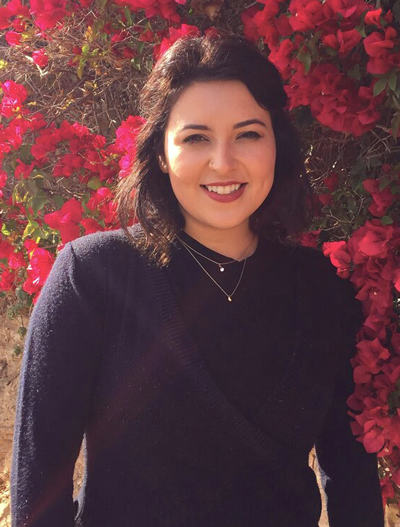 Feb. 5, 2021 - Samueli School student Janay Bombino is one of 44 college students worldwide to win a 2021 Brooke Owens Fellowship. The materials science engineering major, who was selected from more than 800 applicants, is the second UC Irvine engineering student to win the fellowship in the program’s five-year history.

The fellowship, which recognizes exceptional undergraduate women and other gender minorities, includes a paid internship at an aerospace company as well as personal mentorship from an aerospace executive. Bombino will intern at Ball Aerospace in Washington, D.C., this summer, where she will be part of the strategic operations team involved in creating working policy from technical information gleaned from company projects.

Bombino, who will graduate with her bachelor’s degree later this year, specializes in materials and structural design. She has served as a materials lead for UCI’s Spacecraft Thermal Management Systems, an undergraduate-led research lab, where she directed the development of a metal oxide electrochromic film for use as a potential thermal regulation system on cube-satellites. She also has worked on the upcoming preliminary test rocket as a part of UCI’s Rocket Project, focusing on structural integrity and integration of a carbon fiber airframe; and recently began work on a BioENGINE design project that explores the wear-resistance properties of amorphous metals. Her long-term goal is to work on space infrastructure that will allow humanity to become interplanetary.

A non-traditional student who pursued a theater career in New York City before moving back to California, she enrolled at Mount San Antonio Community College and transferred to UCI in fall 2019. “I didn't even know what an engineer was until a few years ago,” Bombino said. “I decided to start taking classes, keep doing things I was interested in and see where that took me. It was definitely the best decision I have ever made.”

The Brooke Owens Fellowship was founded in 2016 to honor the memory of industry pioneer and accomplished pilot D. Brooke Owens, who succumbed to cancer in June 2016 at the age of 35.

“I am incredibly honored and thrilled to have been selected for the Brooke Owens Fellowship, not only because it's an amazing opportunity but also because I believe deeply in its mission of uplifting women and gender minorities in aerospace,” Bombino said. “As a Brooke Owens Fellow, I will be able to explore the aerospace industry, learn on the job and connect with other individuals and mentors who are committed to seeing a more inclusive future for aerospace.”