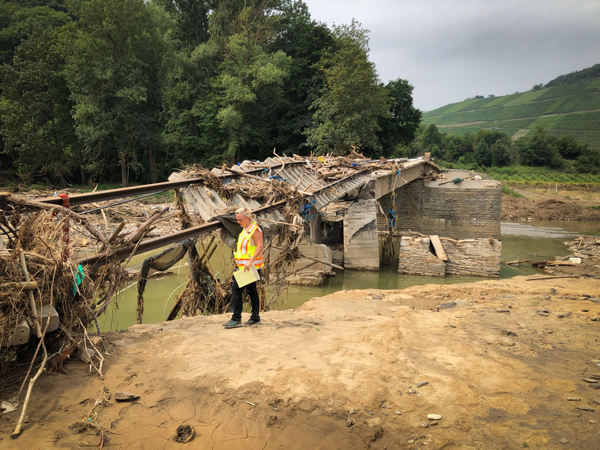 Oct. 7, 2021 - Record rainfall triggered devastating and deadly flooding in Western Europe this past summer. The extreme weather event, July 14-16, killed more than 200 people in Germany and Belgium and caused billions of dollars of damage.

UC Irvine’s Anne Lemnitzer traveled to the flood-ravaged areas several weeks afterward to see what could be learned to improve engineering practice and advance research. Lemnitzer, a Samueli School associate professor of civil and environmental engineering, led an 18-member international team on the NSF-sponsored reconnaissance mission coordinated by the Geotechnical Extreme Events Reconnaissance Association (GEER). Lemnitzer, her co-lead Nina Stark from Virginia Tech, and their GEER team spent 11 days visiting areas in Germany, specifically the Ahr River Valley and its nearby cities, and southern areas of Belgium and the Netherlands.

The engineering researchers interviewed survivors and collected valuable information about infrastructure and the environmental conditions that contributed to the devastation. They looked at the performance of structures and infrastructure under flood loading; erosion and sediment redeposition processes of riverbeds and riverbanks; stability issues and preservation of aging infrastructure; and the effectiveness of flood prevention and protection systems.

Germany, Belgium and the Netherlands all have highly advanced infrastructure, modern flood protection technology and were well prepared for an extreme event. However, floods of this size had not been documented in 500 or even 1,000 years, according to meteorologists and German officials. The amount of rain experienced in those few days significantly exceeded forecasts and expectations. In one night, it rained as much as it typically rains the entire year in that region.

“We will unfortunately experience more of these extreme events given climate change,” said Lemnitzer. “Return periods are becoming shorter, weather patterns are shifting, and our design has not adapted yet to the higher frequency and intensity of recent hazard-related loading caused by flooding.”

In order to assess the damage correctly, a fundamental technical understanding of geo-structural engineering was needed. There were six Americans (including the leads), four Germans, five Belgians and five Dutch on the team, and they included civil engineers specializing in geotechnical engineering, water resources and hydraulic engineering, structural engineering, imaging and remote sensing, and risk and life-cycle studies (as it pertained to infrastructure and insurance issues).

“We assembled an unusually young team of academics and professionals, who were extremely grateful for the unique opportunity to learn and help identify solutions for future design under extreme hazard events,” said Lemnitzer. “We also had collaborations with the German ministry of the interior and other governmental agencies.”

The team had to identify infrastructure damage to see how things were built, and where and why they failed. They needed to understand erosion, sediment transport and redeposition mechanisms, and be aware of building codes and European design practices. “We studied riverbeds that were washed out and completely redeposited elsewhere. The questions that need to be answered in such cases are: What material was transported, why was it so easy to transport and where did it end up?”

Being able to speak the language was key to performing successful reconnaissance. Lemnitzer, who is fluent in German, said, “The organization and coordination on site, as well as gaining access and collecting witness reports are key. You can never learn as much following a disaster if you can’t speak the language of the country where it has happened.”

Lemnitzer said much of the information about the flood development was gathered through interviews with survivors. “Only survivors were able to describe the flood progression, the implosion of houses when hit by huge floating tree trunks, the direction and jam of water, the water speed, the development of tsunami type flood waves, etc.

“The problem is that the most affected flood region is a valley, so all the rain – all 5.5 gallons per square foot – came from both sides of the mountain and into the valley. Raging streams of water with extremely high speed and energy formed in narrow sections of the valley and caused immeasurable destruction,” said Lemnitzer. “The people that evacuated the day before were safe. Those who tried to evacuate the same day often did not make it. You cannot walk in 2-foot deep floodwater while it’s flowing.”

Much of the historical and aging infrastructure was destroyed or damaged. According to Lemnitzer, bridges will need to be redesigned for multi-hazard loading. The weak part for most bridge structures was the connection between the foundation element and the surrounding soil. Environmental preservation in the area became a critical hazard during the flood event. Floodwater was laden with old and unstable trees that were located along the environmentally protected riverbed, but that had been ripped out during the flooding. Trees gathered in the raging floodwaters crashed into houses and bridges.

Much of the flood damage was influenced by the trees and debris that blocked the clearway underneath bridges. This caused damming of water until bridges broke under pressure and from tree-hits, creating a fast-rising water level along the riverbeds and flood areas. Once a structure (e.g., a bridge) broke or was overturned, flash-flood type waves flowed downstream.

Although valuable, this type of reconnaissance mission can be difficult, physically as well as mentally. The flood areas were hard to access due to missing bridges and washed-out roads. Houses were entirely ripped out and there was no food, fresh water, electricity or cell signal.

“Conducting scientific research while people are struggling to clean up, retrieve their last few belongings, trying to repair and recover, and searching for missing family members, it makes you want to help on a different level,” said Lemnitzer, whose last mission with GEER was to Mexico City after the 7.1 earthquake in 2017.

“This is always a major challenge during any reconnaissance. The stories and eyewitness reports were devastating. Our work was often accompanied by just silence. After our first day working in the Ahr Valley, no one spoke a word on our way home.”