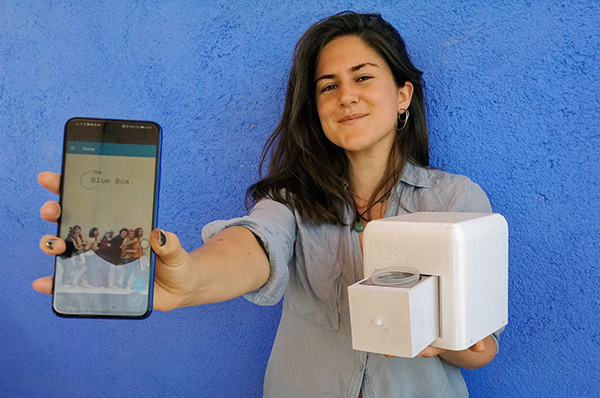 Dec. 2, 2020 - UC Irvine’s Judit Giró Benet has been awarded the James Dyson International Award for her biomedical device innovation, The Blue Box, a breast cancer detection system. Giró Benet, a recent graduate of the UCI master’s program in embedded cyber-physical systems (MECPS) , began developing the system during her undergraduate education at University of Barcelona, further refining it when she arrived at UCI last year as a Balsells Fellow.

Currently a researcher at the Center for Embedded Cyber-physical Systems with Professor Fadi J. Kurdahi, Giró Benet beat out more than 1,800 entries to win the international competition, which awarded her $35,000.

The Blue Box, which Giró Benet expects to cost about $80, is reusable and user friendly. The pain-free, non-irradiating, point-of-care system for home use includes a device – a small blue box – and a corresponding cell phone app. Users slide a urine sample into a drawer in the device, which then uses eight chemical sensors to scan it for specific biomarkers associated with breast cancer. The information is sent to a cloud-based server, where software uses an artificial intelligence algorithm – modeled on a dog’s sensory system, which has successfully sniffed out cancer – to assess it. Results are sent directly to the user’s cell phone.

“The Blue Box is a change in the way society fights breast cancer,” Giró Benet says. “As opposed to the current painful and inconvenient [mammogram], The Blue Box enables women to self-test at home.”

The researcher says her inspiration for developing the device came from CDC statistics that indicated nearly 40% of women skipped routine mammograms, nearly half of them because of the pain associated with the test, potentially resulting in late detection and lower survival rates. Giró Benet realized that combined with an alarming false positive rate and the potential risk of yearly radiation exposure from mammograms, a pain-free, accurate, low-cost alternative was needed.

During the first round of testing, the device showed 75% accuracy when used on 90 urine samples obtained from a hospital. Currently, The Blue Box prototype is 95% accurate when classifying samples from late-stage breast cancer. Giró Benet continues work on the device and data analytics software, with the goal of launching a startup company to bring it to market. She plans to conduct additional human studies among 300 patients with early-stage cancers, ultimately obtaining FDA approval.

The James Dyson Award, offered by the foundation of the same name, was initiated by the founder of the Dyson bagless vacuum cleaner to celebrate and encourage the next generation of design engineers.

“When a person like James Dyson, whom you admire so much, personally calls you and tells you that he thinks that your invention is ‘such a brilliant idea,’ this gives you the motivation and strength to keep pursuing your goal,” Giró Benet said. “Since this news was made public, we have received so much support from all parts of the world. This proves that the need for a better health-care solution for women is real and urgent.”