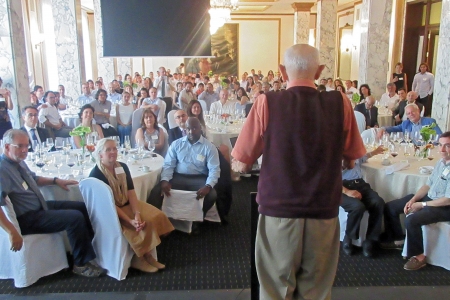 Dec. 9, 2016 - The Samueli School Balsells Fellowship program celebrated its 20th anniversary this summer in Barcelona, Spain, with a luncheon at the Avenida Palace Hotel. Nearly 200 people attended, including current and past Fellows, program founder Pete Balsells, members of Catalonia’s academia and government officials.

The Balsells Fellowship program was created in 1995 with an endowment from Balsells, a successful engineer and Catalan native. The first graduate student Fellows arrived at UC Irvine in 1996, and each year since, the program has grown. Today, under the direction of Roger Rangel, professor of mechanical and aerospace engineering, the school hosts around 35 of Catalonia’s most talented young engineers and scientists who wish to pursue graduate studies and conduct research in engineering.

“The Balsells Fellowship is the most successful international academic program here at the university and in Catalonia,” said Samueli School Dean Gregory Washington, who, along with Rangel, attended the celebration in Barcelona. “I was able to see some of the outcomes of the program and its impact.”

Many of the Fellows have gone on to careers in business, government, research and academia in the U.S., back home in Spain and in other locations around the world. They are at the Jet Propulsion Laboratory, Broadcom, Amazon, Microsoft and Intel, as well as the Bal Seal Engineering Company right here in Orange County, and are as far away as China, Japan and the United Arab Emirates.

“Our school of engineering is very highly regarded in Catalonia and its best engineering students want to come here for M.S. and Ph.D. degrees,” said Rangel, “Many of our fellows have been successful after returning home.”

While in Spain, Rangel visited two companies run by the very first Balsells Fellows. Sergi de Miguel is the CEO of Gometrics, a company founded by his father that specializes in building flow measurement, and mixing and flow calibration devices. Jose-Miguel Pulido co-founded an e-commerce company, PromoFarma, which provides a connection between Spanish pharmacies and the general public. Both businesses are thriving.

Adrian Rey Rodriguez, a Balsells Fellow working on his master’s degree in computer science, already has a job lined up after graduation. He has been impressed with his UCI experience. “It’s been a good program with excellent faculty,” he said. Rodriguez will spend three weeks at home over the holiday break and then start his job as a data scientist for a company in San Mateo, Calif., the first of the year. “I felt like I needed to spend a couple years in industry first before deciding on my next step.”