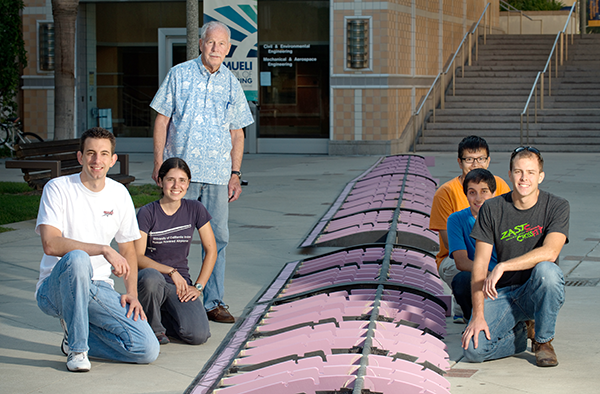 Dec. 10, 2020 - Robert Liebeck, Samueli School distinguished adjunct professor of mechanical and aerospace engineering and faculty adviser for the UC Irvine Design/Build/Fly team, announced his retirement last month from his position as senior fellow at the Boeing Co., capping a long and distinguished career at the aircraft manufacturer.

An expert in hydrodynamics who designed high-lift airfoils that bear his name, Liebeck is a co-designer of the Blended-Wing-Body (BWB) aircraft. The fixed-wing plane, which does not have a clear dividing line between wings and body, provides significantly lower fuel burn and noise than conventional aircraft. He began working on designs for the plane in the late 1980s, becoming Boeing’s chief scientist for the project.

He also designed aerodynamic wings for Indianapolis 500 and Formula One racing cars, as well as the keel for the 1991 America’s Cup winning yacht and the wing for a World Aerobatics Championship airplane.

Liebeck began his career with an internship at Douglas Aircraft Co. in 1961, the summer after earning his bachelor’s degree in aeronautical engineering from University of Illinois. He continued working summers at Douglas through 1968 while he completed his doctorate, also at Illinois, then signed on with the company full time. In 1996, McDonnell Douglas, as the company was then called, merged with Boeing Co.

He joined the UCI faculty as an adjunct professor in 2000, and has served as the faculty mentor for the Design/Build/Fly team since 2005, although he says over the last 10 years, Samueli School graduate student adviser Colin Sledge has assumed a major role. In 2013, the UCI team won first place at the American Institute of Aeronautics and Astronautics Foundation (AIAA) competition, an annual contest that provides students the opportunity to design and build an unmanned, electric-powered radio-controlled aircraft. Under his guidance, teams placed in the top two for four consecutive years. “Design/Build/Fly is a valuable experience for our engineering students,” Liebeck said.  “The name DBF says it all, and it is competitive.”

“Bob Liebeck’s distinguished career and industry expertise add value not only to our faculty but ultimately to our students’ experience, particularly when it comes to hands-on design and building of aircraft,” said Roger Rangel, chair of the Department of Mechanical and Aerospace Engineering.

In 1992, Liebeck was inducted into the National Academy of Engineering, and in 2010 was named an AIAA Honorary Fellow, the organization’s highest distinction. He is also a recipient of the 2005 Spirit of St. Louis Medal, one of the highest honors given by the American Society of Mechanical Engineers; 2010 Daniel Guggenheim medal for notable achievements in the advancement of aeronautics; the 2012 Brigadier General Charles E. Yeager International Aeronautical Achievements Award from the Engineers’ Council; and was inducted into the International Air & Space Hall of Fame last year, alongside such luminaries as Jeff Bezos and Apollo astronaut Dick Gordon.

In addition to teaching at UCI, which he will continue to do, Liebeck is an adjunct professor at the Massachusetts Institute of Technology.

Upon his recent retirement, Liebeck penned some thoughts about his life and career; click here to read.