Seeking to Serve the Poor

Aided by scholarship, transfer student prepares to ‘bring a better quality of healthcare to underserved populations’ 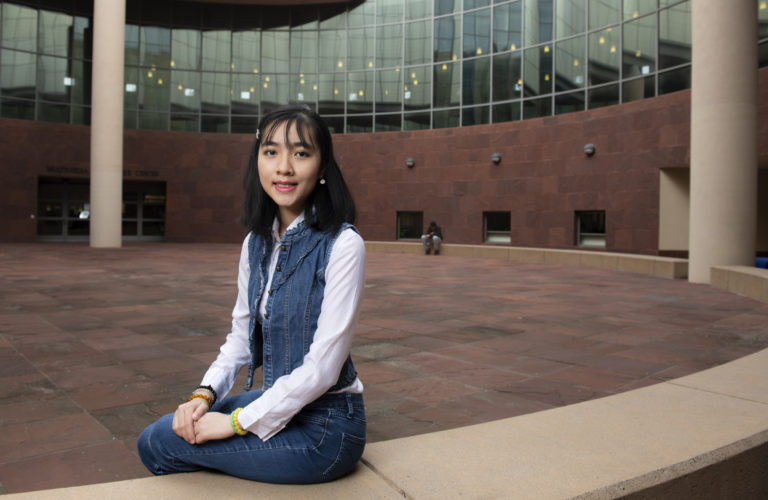 Dec. 23, 2019 - After an orientation fair at Trabuco Hills High School, Loan Le knew where she wanted to go to college. She was impressed with UCI’s core values, its multicultural community and its beautiful urban environment. UCI was the school for her.

But first Le spent a couple years at Saddleback College. Before transferring here in 2018, she was part of the research team for Marc Madou, Chancellor’s Professor of mechanical & aerospace engineering at UCI. She participated through the UCI-Saddleback College Summer Undergraduate Research Program. Le worked on a research project dealing with lithography on curved surfaces using the spontaneous spreading principle under the mentorship of graduate students in the lab.

“This project enabled me to do future research on applications of microfluidics and carbon micro molds in the development of drug delivery and diagnosis systems,” she says. Her research in Madou’s lab and volunteer experiences throughout her lifetime inspired Le’s desire to work in the pharmacy field.

Originally from Vietnam, Le spent time volunteering at a free health fair in Ho Chi Minh City when she was a teenager. She helped pharmacists dispense medications to low-income HIV patients. As Le shadowed the doctors, she witnessed orphans with HIV.

“They never received any treatments and had infections that antibiotics could have easily treated; however, the infections were left untreated due to poverty,” she says. “This unfortunate reality inspired my desire to practice medicine to improve medication adherence and bring a better quality of healthcare to underserved populations.”

When Le came to the United States in 2014, she had difficulty understanding people and speaking English herself. Her accent and limited vocabulary challenged the development of her communication and writing skills in America. Her fear of public speaking heightened. But with the help of teachers and classmates along the way, her confidence and skills greatly improved. Le credits the science classes she took at Saddleback and UCI for helping her overcome her fears, as she had to present research alongside her classmates.

“I am now able to speak English with the fluency of an American and love the experience of public speaking,” she says.

Another triumph for Le came as she was awarded the Osher Scholarship Endowment for California Community College Transfer Students, which aids transfer students who demonstrate academic promise and significant financial need. It significantly alleviated the financial burden on Le’s family, giving her the chance to focus on her studies and pursue her educational aspirations.

“I used to be afraid that I would not be able to afford college and fulfill my dreams because of the overwhelming financial responsibility,” she says. “However, the scholarship encourages me to confidently continue with my academic endeavors, rather than [dealing with] the stress of supporting my education and my family. It inspires me to embrace my time at UCI to the fullest.”

Le is one of many grateful UCI students who benefit from philanthropic support. These scholarships partly cover university expenses and enable recipients to engage in activities outside the classroom – such as research or community service – that enrich their UCI experience and increase their success after graduating. UCI provides nearly 1,000 scholarships funded by generous donors, giving students more than $4 million in academic aid.

After graduating next June with a bachelor’s degree in pharmaceutical sciences, Le plans to attend either medical school or pharmacy school.

“Sharing my compassion with impoverished people, I hope to give back to the disadvantaged families that struggle every day to sustain a family due to financial crisis and who do not have much access to medical assistance,” she says.

Publicly launched on Oct. 4, 2019, the Brilliant Future campaign aims to raise awareness and support for UCI. By engaging 75,000 alumni and garnering $2 billion in philanthropic investment, UCI seeks to reach new heights of excellence in student success, health and wellness, research and more. The Department of Pharmaceutical Sciences plays a vital role in the success of the campaign. Learn more by visiting https://brilliantfuture.uci.edu/school-of-pharmacy-and-pharmaceutical-sc....