Khargonekar Recognized for Contributions to Engineering 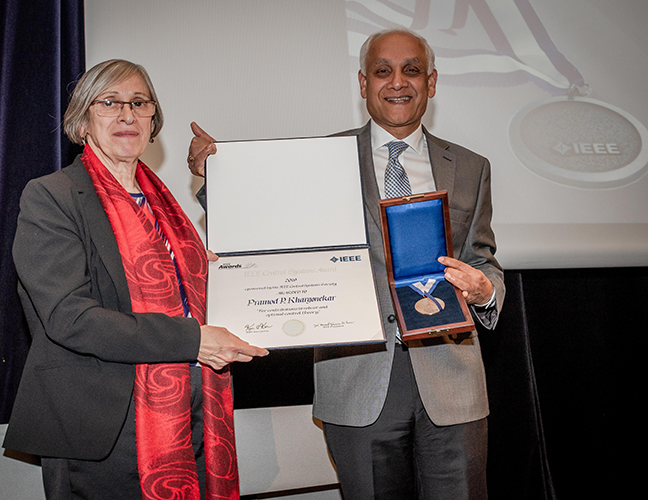 Jan. 22, 2020 - Pramod Khargonekar, UC Irvine vice chancellor for research and Distinguished Professor of electrical engineering and computer science, won a prestigious award from the IEEE Control Systems Society last summer; in December, he collected it, along with a bronze medal and an honorarium, in Nice, France, at the 2019 IEEE Conference on Decision and Control.

Khargonekar was awarded the 2019 IEEE Control Systems Award for his outstanding contributions to robust and optimal control theory. In particular, he played a key role in developing a powerful state-space-based theory for H-infinity optimal control. It is used in ensuring robustness of control design for critical processes in a variety of industries, including aerospace, automotive, manufacturing and processing.

H-infinity control theory provides engineers with a powerful and easy-to-use computational framework for multivariable control synthesis. His work has had wide-ranging impact on theoretical developments in the field, as well as the emergence of computer-aided design tools for its implementation. Additionally, Khargonekar has made multiple contributions to the application of control to semiconductor manufacturing and smart grid renewable energy integration.

Ljiljana Trajković, professor of engineering at Simon Fraser University in Canada, presented the award – which she called “one of the IEEE’s most prestigious technical field awards” – to Khargonekar on behalf of the IEEE Board of Directors. “H-infinity optimal control is among the most significant developments in control theory in the last 40 years, and Professor Khargonekar has played a key leadership role in developing its potential for robust control of critical processes...,” Trajković said. “Throughout his career, he has made seminal contributions to control theory, pioneered applications of control to semiconductor manufacturing and championed the relevance of control through his national leadership.”

In accepting the award, Khargonekar paid tribute to his many colleagues, mentors and students, and expressed his gratitude at receiving the award. “I am extremely happy, greatly honored, and deeply humbled to join the distinguished scholars and pioneers of our community who have received this award in previous years,” he said.

Khargonekar received another accolade from his peers as well; he was appointed to serve on the editorial board of the Proceedings of the IEEE, the flagship IEEE journal in the fields of electronics, electrical and computer engineering, and computer science. His three-year term began Jan. 1, 2020.

The publication’s board members are responsible for generating ideas, reviewing manuscripts, helping plan special issues and sections, and offering advice to the editor-in-chief and managing editor.

“This is a recognition of Pramod’s contributions and stature within the IEEE community,” UCI electrical engineering and computer science department chair Athina Markopoulou said of Khargonekar’s appointment.