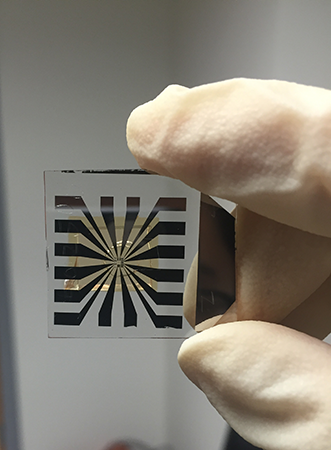 May 9, 2019 - Batteries are ubiquitous in 21st-century life, powering everything from cell phones and tablets to toys, gadgets and increasingly, even medical devices and vehicles. So battery capacity, or the ability to store an electric charge, has long been of interest to scientists looking to improve these tiny powerhouses.

Researchers at UC Irvine are making new inroads into understanding the role that carbon nanowires might one day play in extending the capacity of a type of battery known as a supercapacitor. Peter Burke, professor of electrical engineering and computer science, cautions that the research is not directed at everyday alkaline batteries – at least not yet – but rather at tiny supercapacitors, which power biomedical devices, sensors and other miniature electronics.

Burke and his graduate students Jinfeng Li, Phi H.Q. Pham, Weiwei Zhou and Ted D. Pham studied the electrochemical capacitance between carbon nanotubes and the saltwater solution known as an electrolyte, which is key to the battery’s ability to store a charge. In a paper published last fall in ACS Nano, they measured and analyzed the capacitance of these systems, learning more about how the charge is stored and what factors can improve that storage ability. In contrast to previously studied electrode material, the team found that quantum mechanics play a key role.

Capacitance is based on the interface between a liquid and a metal. The liquid contains sodium chloride ions and ideally, the metal should have a large surface area. The larger the surface area, the greater the storage capacity. Burke explains the process this way: “If you take some sort of salt and put it in water, the sodium can conduct electricity. If you took saltwater from the ocean and put it on a piece of metal you could store a charge at the interface between the saltwater and the metal. Although it doesn’t use salt, that’s essentially how a battery works.”

Instead of experimenting with metal, however, Burke and his collaborators used a .1-millimeter-square tangle of one-dimensional, atomic-sized wires called nanotubes. Each nanotube is only a few atoms wide and because of their extremely small size, have different quantum mechanical behavior than regular metals.

“As things get smaller, their quantum properties become very important,” Burke explains. “When they’re big, materials behave more or less classically. The ability to store a charge is very, very different in a nanotube because of the quantum mechanical effects that occur at the atomic scale.”

Additionally, the carbon nanotubes also have extremely sharp ridges, which result when one-dimensional graphene is rolled into cylinders. The resulting nanowires have diameters of one to two nanometers. “It’s like a bunch of knives, all sticking up,” according to Burke.  Because surface area is such an important part of capacitance, these sharp ridges, which increase the nanotube’s surface area, also improve their capacitance. “When you make ridges, you get more surface area,” Burke says.

In addition, the atomic-scale ridges are the same size as the atoms in the saltwater, which results in an enhanced relationship between the charge and the surface area of the ridges.  “They store a lot more charge,” says Burke.

The tiny nanotube mat used in the team’s research contained approximately 10,000 carbon nanotubes, and researchers measured their combined capacitance. In new research, which Burke and his team expect to publish in the coming months, they take on the much harder task of measuring capacitance in individual nanowires. “The amount of electrical energy stored in one carbon nanotube is so tiny that it’s extremely hard to measure,” Burke says.

The nanowire experiment yielded three important takeaways for the scientists: they gained a better understanding of the quantum mechanics of these tiny electrodes; they were able to shrink the capacitor down to a tiny surface area, which could store a lot of electricity; and they learned that carbon provides different quantum effects than other metals.

Burke was pleased with the paper’s success. “This work shows how quantum mechanics plays a role in nanowire-based energy-storing battery devices,” he says. “It lays the intellectual foundation for understanding a whole new class of electrodes for battery applications.”