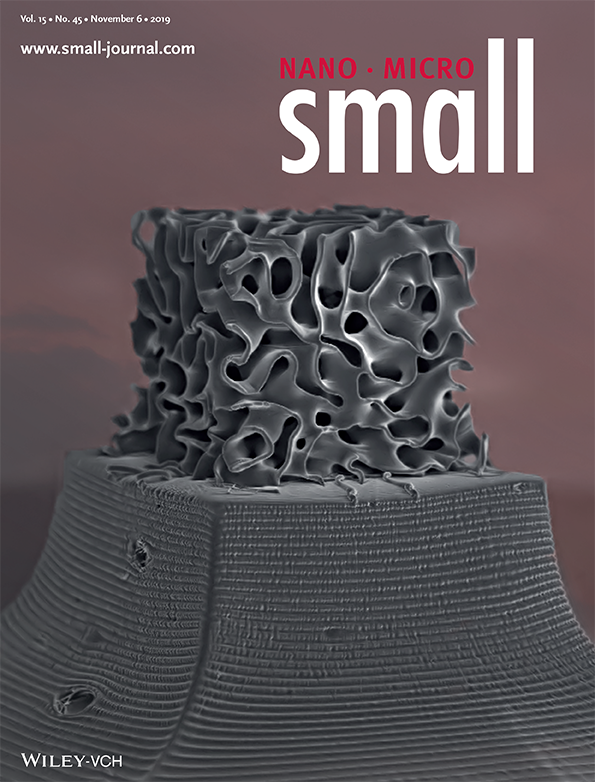 Nov. 13, 2019 - An innovative approach developed by Samueli School researchers to creating nanomaterials that are light, strong and can dissipate energy under impact is gaining national attention. The work, characterized in a paper titled Ultrahigh Energy Absorption Multifunctional Spinodal Nanoarchitectures, was written by Lorenzo Valdevit, professor of materials science and engineering, two graduate students and two postdoctoral researchers. It appears on the cover of the Nov. 6 issue of Small, a multidisciplinary nanotechnology journal.

Nanomaterials are often thought to be the solution for those seeking strong and ductile next-generation materials. But in many cases, these engineered materials exhibit one important characteristic at the expense of the other; they are either super strong but quite brittle, or extremely deformable but low in strength. The spinodal (shell-shaped) nanoarchitectures that Valdevit and his group are developing seem to have both extreme strength and the ability to maximize energy absorption.

In this case, Valdevit’s research group – which includes graduate students Anna Guell Izard, the paper’s first author, and Cameron Crook, along with research scientist Jens Bauer and Vladyslav Turlo, a postdoc in professor Tim Rupert’s group – used a polymer and a high-resolution 3D printing process called two-photon-polymerization direct laser-writing to print the three-dimensional shell-shaped architectures. The polymeric structures are then pyrolized – heated at approximately 900 degrees Celsius (1,650 degrees Fahrenheit) in a vacuum – until the hydrogen and oxygen vaporize, leaving only a carbon backbone.

Carbon is a ceramic material, which means it is usually very strong but also brittle. However, because each structure within the sample is so small – the thickness of each shell is only 100-200 nanometers, about 1/1000 the thickness of a human hair – the tiny cracks that may develop are not big enough to cause structural failure. The result is a ceramic material with excellent strength. Valdevit explains that even when the constituent carbon has no defects, thicker-walled structures can still crack catastrophically under load. But as the walls become thinner and thinner, they produce a different and more desirable, fracturing mechanism that breaks the material layer by layer, allowing the material to dissipate energy more effectively.

“The fact that we can dissipate so much energy from a ceramic material is very unique,” Valdevit says. The project was funded by the Office of Naval Research, he adds, “so we’re trying to design materials for impact protection.”

Although the laser-printing process used to produce the sample nanomaterial is not easily scalable, the spinodal shapes can self-assemble in nature. “If you could fabricate these structures at whatever scale while retaining the nanoscale features, it would be the holy grail,” Valdevit says. He is collaborating with Ali Mohraz, associate professor of chemical and biomolecular engineering, on a process to create them in the lab using liquids and a templating procedure. In the meantime, his group has succeeded in printing identical structures to those that can self-assemble. “And the shape is what is important,” he emphasizes.

Valdevit is pleased that the group’s research will appear on the cover of Small, and he credits his team with the project’s success. “Being on the cover is cool,” he says. “This actually came about because of the students and researchers in my group. It is a fantastic team and everyone worked really well together.”