Roadmap to provide significant detail through 2025, higher level outlook through 2050 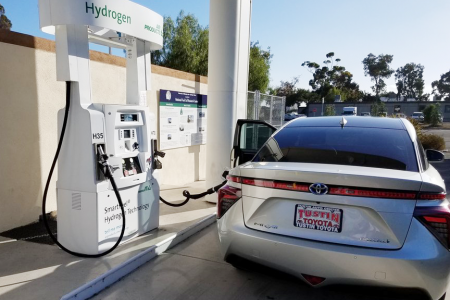 Sep. 5, 2018 - The Advanced Power and Energy Program (APEP) has been awarded a grant by the California Energy Commission to develop a deployment roadmap for renewable hydrogen production in California through 2050.  The effort will initially focus on extracting insights from the first set of renewable hydrogen production facilities under development in California, and developing a roadmap for the build-out necessary to serve the growing demand for renewable hydrogen to serve transportation, power generation, and other applications.  The roadmap will provide significant detail through 2025 and a higher-level outlook in five-year increments through 2050.

The project will address the current and projected cost and performance of renewable hydrogen production technologies including electrolysis, organic conversion via anaerobic digestion and gasification as well as associated processes, such as gas conditioning and reformation.   Feedstock availability and cost and siting requirements for each production technology will also be characterized.

Importantly, renewable hydrogen demand scenarios will be developed based on forecasts for fuel cell electric vehicle (FCEV) deployment and other potential sources of demand for renewable hydrogen such as stationary fuel cells, goods movement, port applications, marine, rail, refining and fertilizer production.  The information will be integrated into a deployment roadmap with time-phased scenarios for the evolution of a renewable hydrogen production facility network, the associated costs, and recommendations for network integration with the hydrogen supply chain.   Finally, regulatory, policy and further research and analysis recommendations will be defined.