Scientists Create Nanomaterials That Reconfigure In Response To Biochemical Signals 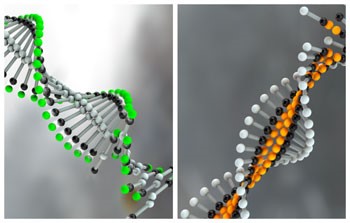 Apr. 30, 2018 - A newly published paper in Nature Chemistry details how a research team lead by scientists at the City University of New York Advanced Science Research Center’s Nanoscience Initiative are developing self-assembling electronic nanomaterials that can respond to biochemical signals for potential therapeutic use. UC Irvine's Allon Hochbaum is a co-author.

Biological cells have the complex and miraculous ability to reconfigure and change the way they communicate with each other over time, allowing them to nimbly direct critical functions in the human body — from thinking to walking to fighting disease. A major challenge in materials science is developing nanomaterials that can replicate aspects of these cellular functions and integrate with living systems. In a paper published today in Nature Chemistry, a team of researchers led by scientists at the Advanced Science Research Center (ASRC) at The Graduate Center of The City University of New York detail how they have created synthetic materials with the ability to mimic some behaviors normally associated with living matter.

“The ability to self-assemble, reconfigure and disassemble in response to chemical signals is a common trait in biological materials, but not in manmade ones” said Mohit Kumar, the paper’s lead author and a scientist with Rein Ulijn’s research group at the ASRC’s Nanoscience Initiative and Hunter College. “If you want to integrate synthetic materials into biology, a seamless interface is desirable, which requires materials that share some of the properties of living matter. Our approach will hopefully open the door to manmade materials that can interact with and repair living systems.”

To develop nanomaterials that reconfigure in response to chemical signals, researchers started with the base molecule naphthalenediimide (NDI), which is an organic semiconductor. The molecule was selectively modified on both sides by exposing it to biochemical signals in the form of simple amino acids that were added to the system. An enzyme was used to incorporate the amino acids onto the core molecule, triggering self-assembly and disassembly pathways. This process allowed the formation and degradation of nanomaterials with wire-like features capable of conducting electrical signals.

By using different amino acids, researchers were able to direct the development of nanomaterials with different properties, including a programmable nanostructure with the ability to turn electrical conduction on and off through the use of time-dependent self-assembly and disassembly.

“Like neurons in the brain, these materials exhibit a remarkable ability to remodel their electrical connections,” said Allon Hochbaum, a co-author of the paper and material scientist at the Samueli School of Engineering, University of California, Irvine(UCI). “The assembly of these molecules is encoded in their dynamic chemistry, so by simply changing the chemical inputs, we can observe insulating nanomaterials, conductive nanomaterials, or nanomaterials that dynamically switch between conducting and non-conducting states. The fact that their assembly and conductivity evolve in water makes these materials all the more compelling for bio-interfacing applications.”

“We want to see if we can use the dynamic electro-conducting nanomaterials to effectively interface with neurons and result in their on-demand electrical firing,” said Rein Ulijn, director of the ASRC’s Nanoscience Initiative. “We’re still early in that aspect of the work, but what we have so far is an exciting breakthrough that demonstrates the possibility for creating manmade materials that mimic a complex, dynamic activity of biological systems. These new nanomaterials have the ability to respond to biologically relevant chemical signals and provide an electronic interface. In the long run, this may open up a new pathway towards developing treatments that, until now, have only been theoretical.”