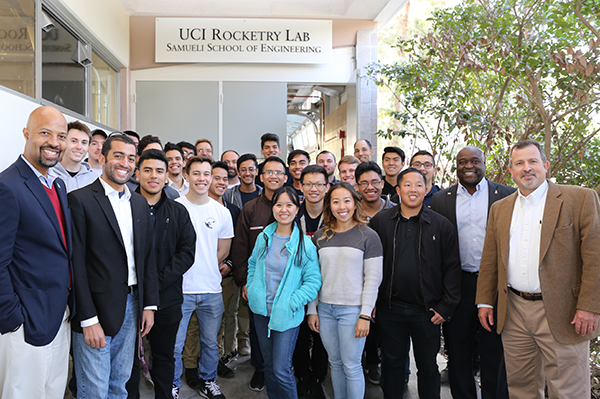 March 21, 2018 - The Samueli School of Engineering unveiled the UC Irvine Rocketry Lab in February 2018 to a large crowd of students along with a few staff, faculty and donors. The mechanical and aerospace engineering students were eager to see the new 150-foot-long lab, located on the ground floor and park side of Engineering Tower. Equipped with tools, worktables and powerful computers, the lab supports the mission of the rocket project senior design team to make UCI the first university to launch a rocket into space.

The new workspace was made possible by a $1 million gift given last year by Base 11, a nonprofit STEM workforce development and entrepreneur accelerator. Base 11 named UCI its “Partner of the Year” for 2017, in recognition of the school’s willingness to be involved, enthusiastic and engaged. Base 11 CEO Landon Taylor and philanthropist Foster Stanback attended the Rocketry Lab celebration.

“This has been a year in the making,” said Gregory Washington, the Stacey Nicholas Dean of Engineering. “We were challenged by Base 11 and Foster Stanback to build a rocket that can make it into space. We undertook that challenge, and today is a great day for us as we formally dedicate the UCI Rocketry Lab.”

Stanback, who is interested in advancing STEM education in general and human spaceflight specifically, was impressed. “What you’ve created here is a training ground like no other,” said the philanthropist. “There’s nothing like a rocket to inspire kids of all ages. We really ought to be further along [in our quest to explore space] but it will change with these students.”

The UCI Rocket Project team is working on the engine for a rocket capable of reaching 45,000 feet using liquid oxygen and liquid methane as propellants. The 30-member team plans to enter a contest for the FAR-MARS prize of $50,000 to $100,000, sponsored by the Mars Society and the Friends of Amateur Rocketry (FAR). Held over two weekends in May, the competition will take place at the FAR rocket launch complex, located north of Edwards Air Force Base.

Washington unveiled a plaque acknowledging the generosity of Base 11, and he credited faculty members Ken Mease and Mark Walter for their efforts in developing the lab and advising students.

Rocket project team manager Stephen Moes, a fourth-year mechanical engineering student, says his team is happy to have dedicated space, and he is confident in his team’s capabilities now that they have the support of funds and resources. “We’ve been sharing with another project team, HyperXite, so to have our own lab is great.”