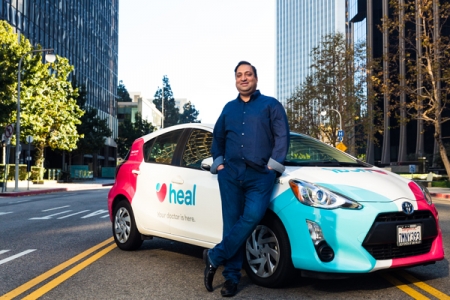 Feb. 2, 2018 - Forbes’ contributor Robert Reiss of the CEO Forum has named Nick Desai ’91 one of 10 CEOs who are transforming health care in America. The UC Irvine alumnus and Engineering Hall of Famer is CEO of Heal, a company he co-founded in 2014 with his physician wife. Desai created a technology-enabled model that brings back doctor house calls and home-based medical services.

With Heal, Desai and his wife are on a mission to fix the broken $3 trillion health care system. According to Desai, getting patients out of the hospital by delivering primary, preventive and urgent care through house calls not only reduces costly and avoidable emergency room trips by 28 percent, but also leads to better medical care. With doctors able to see patients’ medications, environmental factors, lifestyle and diet, Heal has reduced unnecessary prescriptions, tests and referrals by 51 percent -- resulting in cost savings of $27 million in just 40,000 house calls.

Silicon India magazine also recently featured Heal’s success. Desai shared the news with Samueli School Dean Gregory Washington in an email, writing, “It is what I learned at UCI as an engineering student that launched me into a career of technology innovation and leadership.”