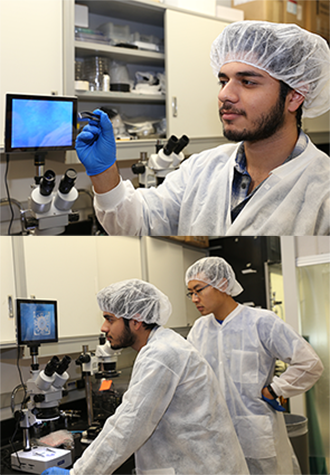 Dec. 19, 2018 - Current military instruments, like missiles and ground/air vehicles, often rely on global positioning systems for location, navigation and control. The problem, though, is that GPS signals are weak and therefore vulnerable to outside interference. “You can turn on your hair dryer and easily jam or overpower GPS signals,” says Andrei Shkel, Samueli School mechanical and aerospace engineering professor.

Hackers have turned this susceptibility into a form of modern warfare. They can “spoof” GPS systems, creating havoc by directing instruments away from their intended targets.

So Shkel and his team are working with the U.S. military to develop an alternative positioning system. Armed with DARPA funding of more than $2.9 million, they are fabricating a tiny gyroscope as part of a self-contained inertial measurement unit (IMU). The IMUs can work alone or in conjunction with GPS – taking over during a GPS outage, for example – to provide interference-free navigation.

IMUs contain a minimum of three gyroscopes, which measure orientation in space, and three accelerometers, which document position. “The six sensors give complete information about position and orientation of any object without depending on GPS. They don’t require external signals and therefore cannot be jammed or spoofed,” says Shkel, who adds that the gyroscopes are the most complicated part of the IMU.

The project incorporates a previously unused – at least in gyroscopes – approach known as mechanical amplitude amplification, which increases the signal-to-noise ratio and therefore the sensitivity of the device. In addition, the gyroscopes vibrate, and they measure the angle of rotation rather than the angular velocity, the way lower-performance devices do. According to Shkel, such mechanization has never been accomplished on the microscale. It involves sophisticated engineering design and requires extremely precise manufacturing techniques.

Unlike GPS, which is relatively inexpensive, high-precision gyroscopes contain nearly 100 parts, which must be assembled, aligned and polished by hand, and can cost tens of thousands of dollars apiece. Shkel is working to create these sensors more cost-effectively by developing new chip-level microfabrication techniques that could lead to mass production.

His team is using off-the-shelf fused quartz to produce sensor chips, in contrast to the silicon used in most MEMS devices. Fused quartz has a higher quality factor than silicon; Shkel compares it to striking a premium quality wineglass and hearing a more sustained vibration than when striking a low-quality glass. Additionally, unlike crystalline material, fused quartz has identical properties in all directions. “If you try to deform a single-crystal material, such as silicon, it will have different deformation and different stiffness levels along different directions,” Shkel explains.  “This is what we are trying to avoid. For high-performance devices, we need to have identical mechanical properties in all directions.”

While fused quartz provides mechanical qualities not available in other materials, it is difficult to micromachine. Shkel and his team are using new photolithography techniques, experimenting with etching recipes and masking materials in an effort to find just the right combination. Using tools in UC Irvine’s INRF and BiON facilities, researchers are etching 100-micron-deep structures into the 4-inch wafers. “Fused quartz is transparent; it is effectively a super-high-purity glass. The material has excellent structural and thermal characteristics, but it is extremely inert to the chemicals needed to machine it. Trying to etch these very deep and high-aspect ratio structures into it is difficult,” Shkel says. “But we see it as a path to the future of making this very high-precision device.”

In addition to designing and fabricating the gyroscope – which can range from 1 millimeter square to about 7 millimeters square – Shkel and his team are creating packaging for the instrument. To function properly, the gyroscope must be vacuum-sealed to isolate it completely from the environment. “For something like this to oscillate in open air would be equivalent to a person running in water or in melted caramel,” he says.

The team also has developed algorithms to control the device’s electronics and compensate for residual imperfections. But perhaps more impressive, is the fact that they recently received Phase 3 funding – a rare occurrence in DARPA projects, according to Shkel. 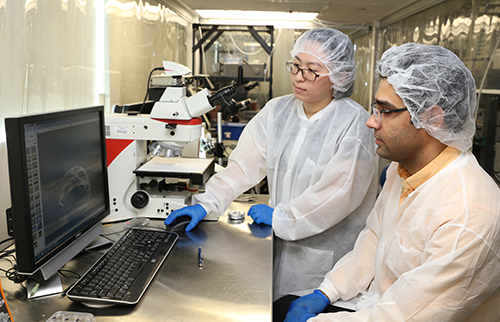 The team learned of the additional $1.05 million in funding after demonstrating the project’s technology to a government delegation that visited UCI last summer. DARPA funds projects in phases, and attaining funding beyond the initial feasibility study is uncommon in academic research. “Only after you demonstrate measurable, quantitative results do you transition to the next phase,” Shkel says. “The fact that we were transitioned to the final Phase 3 of the program is a big deal and a tribute to our strength at UCI in the development of innovative microsystems.”

The additional funding allows the project to expand from a two-dimensional gyroscope architecture to a 3D version. Each has a separate design and different functionality. The 2D version has been designed to “sleep” through intense shock, like that which occurs during a launch, while the 3D version will continue to operate during this critical window. Shkel expects the two complement each other. “The 3D gyroscope will be responsible for doing very precise measurements when a missile or a vehicle goes through this very high shock, and the amplitude-amplified 2D sensors are better suited to do very precise measurements when conditions are sort of benign,” he explains.

If Shkel’s team is successful, the IMUs they will eventually produce will increase exponentially in sensitivity, shrink from the size of an apple to that of an apple seed, and thanks to photolithography, be mass-produced, reducing cost by orders of magnitude. “It’s important to have the right tools, the right people and good cleanrooms, which we have at UCI,” Shkel says. “It’s a very exciting and impactful project.”