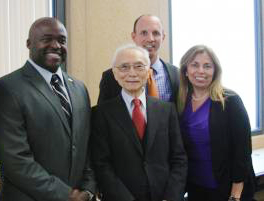 Nov. 16, 2018 - UC Irvine Professor Emeritus Masanobu Shinozuka, a former Distinguished Professor in civil and environmental engineering known around campus as “Shino,” has died in California on Nov. 5, 2018, at the age of 87.

Shinozuka was a pioneer in development of the new fields of stochastic mechanics, structural safety and reliability, uncertainty quantification, and risk assessment and management methodologies. In particular, he introduced, established and promoted the use of Monte Carlo simulation techniques in engineering mechanics and civil engineering. Shinozuka also was a world-renowned expert in earthquake and wind engineering, and in the design of structures resistant to natural and human-induced disasters. He was elected to the National Academy of Engineering (NAE) in 1978 for his work in random vibrations and related applications to the safety and reliability of structures. He made innumerable additional contributions to many areas of civil engineering and engineering mechanics, including risk assessment of lifeline networks, socioeconomic impact of natural disasters, smart infrastructure systems, remote monitoring and control, and nondestructive evaluation of structural safety.

Born in Tokyo on Dec. 23, 1930, Shinozuka received his bachelor’s degree in 1953 and his master’s degree in 1955, both in civil engineering, from Kyoto University. He came to the U.S. and earned his doctorate in civil engineering and engineering mechanics at Columbia University, working under the direction of Alfred Freudenthal, who taught at the engineering school from 1949 to 1969. Shinozuka taught in the department for 30 years, from 1958 to 1988, and was eventually given the title of Renwick Professor. He then joined the faculty at Princeton University as Sollenberger Professor but left in 1995 to become the Fred Champion Professor of Civil Engineering at the University of Southern California.

Shinozuka came to UCI as a Distinguished Professor in 2001 and served two terms as chair of the Civil and Environmental Engineering Department. He was on the UCI faculty through 2013, then returned to Columbia and taught until 2016.

“Shino was always ahead of the pack with his research, pushing out into important new frontiers before they became mainstream,” said Brett Sanders, a professor of civil and environmental engineering who served as department chair following Shinozuka. “The department grew both in its size and stature under his leadership, and we are indebted to his many contributions.”

In addition to his election to the NAE, Shinozuka won many other honors and awards. In 2014, the American Society of Civil Engineers (ASCE) established a medal in recognition of his many contributions to the field. The Masanobu Shinozuka Medal honors an individual for outstanding research contributions in stochastic mechanics, reliability and risk and simulation. Other major awards include the 1978 Alfred Freudenthal Medal from ASCE’s Engineering Mechanics Institute (EMI) and the prestigious Theodore von Karman Medal from ASCE’s EMI in 1994. He also received the Egleston Award for Distinguished Engineering Achievement from Columbia in 2004.

Shinozuka served as director of NSF’s National Center for Earthquake Engineering Research, president of the International Association for Structural Safety and Reliability, and president of the Engineering Mechanics Division of ASCE. He was a fellow of the American Society of Mechanical Engineering, a foreign member of the Russian Academy of Natural Sciences, and a distinguished member of ASCE.