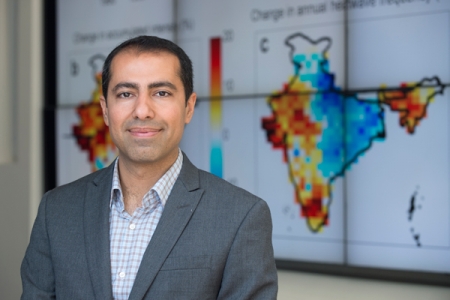 July 6, 2017 - The American Geophysical Union has selected Amir AghaKouchak for the 2017 Hydrologic Sciences Early Career Award. This honor recognizes outstanding contributions to the science of hydrology, education or societal impacts by a scientist at an early career stage in his or her career, and acknowledges the researcher’s promise of continued contributions to hydrologic science.

“I am truly humbled and honored,” said AghaKouchak, associate professor of civil and environmental engineering. “This is not an individual recognition. I believe it is a reflection of the amazing work of my collaborators, students and postdocs (current and former).”

AghaKouchak‘s interdisciplinary research crosses the boundaries between hydrology, climatology, statistics and remote sensing to address critical global water resource issues. His research objective is to utilize continuously growing satellite data along with ground-based observations to develop and improve integrated drought, flood and landslide modeling, prediction and decision-support systems. His focus in the area of hydrologic extremes (flood/landslide/drought) often crosses over into other hazards related to civil and environmental engineering, including those of a structural and geotechnical nature.

AghaKouchak is one of 75 scientists to receive accolades from groups representing their disciplines within the American Geophysical Union, the world’s largest Earth and space science society. He will receive the award at the AGU fall meeting in New Orleans in early December.