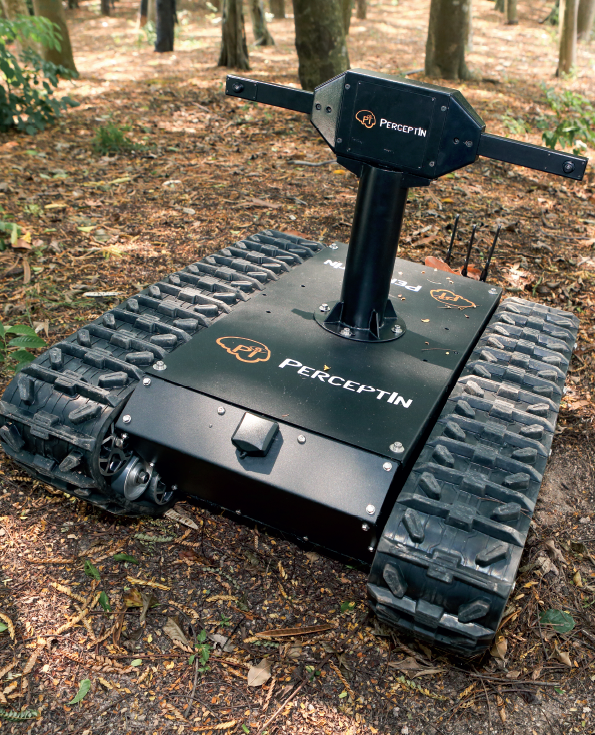 Nov. 27, 2017 - Intel is in. Apple, Google, Uber and chipmaker Nvidia are on board, too. Now, a company called PerceptIN, founded by an entrepreneur who earned all of his degrees, including a doctorate, from UC Irvine, is competing in Silicon Valley’s hottest race: to develop and market autonomous vehicle navigation systems.

Autonomous vehicles could outnumber driver-controlled cars by 2040, and PerceptIN’s founder and chairman, Shaoshan Liu, predicts that in the not-so-distant future, autonomous transportation will become a basic utility like electricity and water.

While numerous companies are competing to develop the advanced technology, several noteworthy differences set PerceptIN apart, according to Liu. The startup, incorporated in 2016 and headquartered in Santa Clara, Calif., has upended the current paradigm. Its product consumes less computing and electrical power, dissipates a much smaller amount of heat and costs a fraction of the price of its competitors’. The company’s methodology, influenced in part by Liu’s UCI doctoral research, is the focus of an August 2017 cover story in IEEE Computing, authored by a team that includes Liu and his UCI graduate adviser, Jean-Luc Gaudiot.

Gaudiot, professor of electrical engineering and computer science, specializes in computer architecture, parallel and distributed processing, and reconfi gurable architectures. The latest advances in those fields can be seen clearly in PerceptIN’s modular, high-performance, configurable and dynamic architecture.

“Researchers are actively exploring computer architectures that can reduce the cost of autonomous driving to make it aff ordable for the general population,” says Gaudiot, who also serves as the 2017 IEEE Computer Society president. “And this system is also secure; each node has a mechanism that prevents other nodes from impacting it.”

The team’s software doles out computing tasks using a heterogeneous ARM mobile system on a chip that matches individual workloads to specific computing units. This results in a highly efficient system. The best part: the company can produce the hardware, sensors and software for around
$2,000. By comparison, top-of-the-line LiDAR (laser imaging detection and ranging), the backbone of most current autonomous vehicles, can cost $80,000 or more – twice as much as the vehicle itself. (Smaller LiDAR systems are available for less, but they provide far less information, too.)

In addition to being expensive and unsightly – it looks like a large rotating top positioned on the roof of the car – LiDAR’s acuity diminishes in certain weather conditions because it uses light spectrum wavelengths. LiDAR cannot detect color or contrast, and cannot provide optical character recognition capabilities, important in recognizing and analyzing traffic signs and other roadway symbols.

A fully autonomous vehicle uses numerous sensors to perceive its environment and navigate safely, generating a huge amount of data, which the car must process on board in order to make driving decisions. This high volume of sensor data not only requires a complex computational pipeline, but processing can consume thousands of watts of electrical power.

PerceptIN’s vision-based system breaks down the computing tasks, assigning them to multiple platforms and processing solutions, radically reducing the required computational pipeline. Both computing power and energy expenditure are also reduced. The proprietary software fi gures out the most suitable computing resource for each autonomous driving task – sensing, perception and decision-making – and assigns it to that resource

Gaudiot, Liu and their collaborators analyzed all the tasks required to produce safe and eff ective autonomous driving, and determined that some of them need to be performed only sporadically. “We thought, why not start having things that are more tailored to each part of the computation?” says Gaudiot. “So we’ve got specialized architectures, multiple types of cores and we’re doing heterogeneous computing.” Because the system is modular, it is easy to add computing resources as needed.

While Gaudiot has spent his research capital investigating distributed computing architectures, his former student has long prepared for the advent of artifi cial intelligence. As a UCI grad student, Liu says, he read an article written by Microsoft founder Bill Gates that envisioned a future where robots were nearly ubiquitous. “That gave me a lot of inspiration and I decided that I should work on providing computing solutions for robots.”

After earning his doctorate in computer engineering in 2010, Liu worked at Microsoft, LinkedIn and Baidu USA before founding PerceptIN last year. In addition to its autonomous computing product, the company provides hardware and software for a variety of robots, including intelligent toys, robots for cleaning and other in-home services, surveillance and virtual reality applications.

“We may not feel it strongly yet, but this is the dawn of the AI (artifi cial intelligence) era,” Liu says. “In the next 10 years we will see explosive development in this field.”

For automobiles, this means progressing successfully through the four stages of autonomous driving – from level zero, which denotes complete control by the driver, to level four, where the car does everything, including parking, without human participation.

PerceptIN currently is testing a demo vehicle at its R&D facility in Shenzhen, China – Liu calls it the “Asian Silicon Valley” – and results are encouraging. The company will test the system later this year in the U.S., and has scheduled a global product launch this fall.

Liu, who says his company’s complete autonomous vehicle system costs less than $10,000 for hardware, software and chassis, envisions a future where driver-controlled cars are obsolete, and autonomous vehicles are shared and scheduled by a community-wide central system. “Imagine how this would help the environment and alleviate the global-warming problem,” he says. “Thanks to autonomous driving technologies, our future vehicles, roads and even the world at large will be safer, run more e ffi ciently, and suffer far less from combustion-related pollution.”

There are still hurdles, however. “We have closely collaborated with the UCI engineering school, mainly with Professor Gaudiot’s group, to develop cutting-edge technologies on AI and autonomous driving, and we have a series of good results coming out,” says Liu. “But this will not be an easy journey. There will be a lot of barriers ahead for us to get around.”

Gaudiot, however, thinks advances in computer engineering can successfully challenge those obstacles. “Computing capabilities in the form of denser chips, multiprocessors, heterogeneous computing and power-aware techniques will allow us to meet the intensive requirements for embedded autonomous systems,” he says. “And this system makes it aff ordable. This is our goal: to make something practical, usable and affordable.”