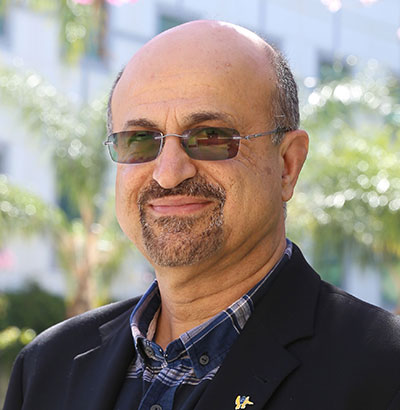 April 4, 2016 - Three Samueli School professors are teaming with a UCI physics professor to investigate the effects of radiation on a new type of memory technology. Spin transfer torque random access memory (STT-RAM) is faster, more durable and uses less power than existing non-volatile memory devices – like NAND flash in typical memory sticks. (Non-volatile means the data remain even when the device is disconnected from a power source.) STT-RAM has unlimited potential for civilian and military applications, but because radiation – common in outer space; possible on Earth – can severely damage memory functionality and cause failures, researchers are seeking ways to identify damage, rapidly test devices and find ways to recover stored data.

Electrical engineering and computer science professors Nader Bagherzadeh (principal investigator) and Ozdal Boyraz, along with chemical engineering and materials science professor Mikael Nilsson and physics professor Ilya Krivorotov will build a one-bit STT-RAM memory device, zap it with radiation and use laser technology to rapidly evaluate the resulting damage. The team also will investigate ways to repair the devices and recover stored data. The three-year project has received more than $1 million in funding from the Defense Threat Reduction Agency (DTRA), a branch of the U.S. Department of Defense.

STT-RAM is not yet commercially available, according to Bagherzadeh, but will be in the near future. Because it could complement or replace current forms of memory, there is interest in knowing how it will behave under damaging conditions, like those in outer space. Or, in the case of a nuclear attack that could impair electronics, scientists are interested in the ramifications. “We have a good understanding of this phenomenon for other types of memory, but we have less information on STT-RAM,” Bagherzadeh says.

“Being selected as one of the projects funded by DoD is a great honor for me and my co-PIs,” he adds. “As corporate R&D is more focused on near-term results, this multidisciplinary and forward-looking project demonstrates that research universities are the main venues for cutting-edge research that involves a diverse group of experts.”