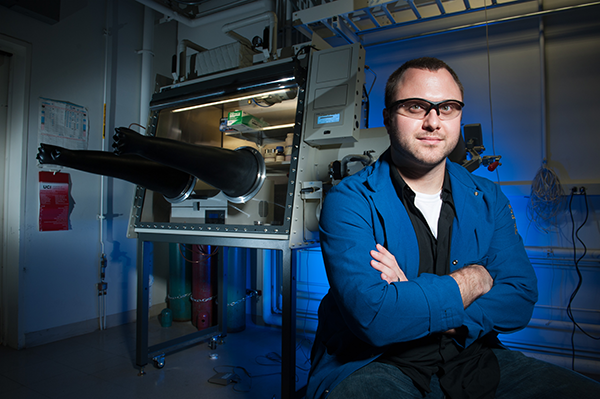 Dec. 5, 2016 — Those intending to keep pace with Tim Rupert had better buckle in.

In a seldom-achieved feat, the wunderkind earned his doctorate in materials science in 2011 from MIT a mere four years after receiving – also in only four years – a joint bachelor’s/master’s degree from Johns Hopkins University.

Rupert, however, doesn’t take himself too seriously. With a boyish countenance and a ready laugh, he refers often to the fun he’s having with his work. “I really like being in the lab and not knowing what the answer is, and trying to figure it out. The problem-solving – that was always the fun thing,” he says. “It’s still fun.”

His Nanoscale Mechanics and Materials Lab uses experimentation, characterization and computational techniques to understand nanocrystalline metals and alloys, thin film materials and atomic-level interfaces. His goal: to engineer better metallic materials at the nanoscale level, where the possibilities are almost endless.

Rupert controls the materials’ mechanical properties by doping their boundaries – adding carefully selected elements to the interfaces between their crystals to improve strength, ductility and other properties. And because nanocrystals are so much smaller than standard crystals, they offer far more grain boundaries – and therefore infinitely more interfaces – that can ultimately change their behavior.

He successfully demonstrated this approach in a new copper zirconium alloy that is both tremendously strong and highly ductile (able to deform under stress without breaking). These properties usually occur in reverse proportion; the stronger the material, the less ductile it is and vice-versa. But by changing the chemistry, Rupert designed a material with healthy doses of both characteristics.

Martin Harmer, the Alcoa Foundation Professor of Material Science and Engineering at Lehigh University, was instrumental in developing the grain boundaries theories upon which Rupert bases his own work. “Professor Rupert’s group has cleverly applied the Lehigh grain boundary complexion concept in order to engineer nanocrystalline alloys to have spectacular mechanical properties – specifically a combination of exceptionally high ductility and strength,” Harmer says. “As far as I know, they have broken the world record for these materials in this hard-to-obtain and critical property combination.”

The minuscule nanomaterials fascinate Rupert. “I have a dozen books on my shelf that will tell you how traditional steel deforms. But nanomaterials behave very differently because their internal microstructure is so small,” he says.

His quest to understand how materials’ internal structures control their properties is rooted in physics: what causes the atoms in particular materials to act in a certain way? “If you understand what’s happening inside the material, it’s super easy to do the engineering,” he says with characteristic enthusiasm.

“Tim has always been a high-energy, high-throughput researcher,” says his graduate adviser, Chris Schuh, head of the MIT Department of Materials Science and Engineering, and the Danae and Vasilis Salapatas Professor of Metallurgy. “I think this is because he is not only a creative thinker, able to find interesting new questions and unsolved problems, but … he has an uncanny ability to focus in on the most effective approach to addressing those questions and solve those problems.

“He managed to complete a thesis blending computer simulations and challenging experiments in only four years at MIT, and launched himself into an academic career without even stopping for a postdoc – or a breath!” Schuh continues.  “At UCI, he has maintained his incredible pace of discovery.”

Rupert says the new materials will have applications in bridges, buildings, airplanes, cars and other vehicles, making them lighter and/or more energy efficient and allowing improved strength with far less material.

These nanostructured materials also can play a role in nuclear energy, hydrogen storage and even electronics. “These applications are not structural, they’re not holding the load on a bridge, but a lot of failure in electronics, in fuel cells and batteries, are mechanical in nature,” he says.

For him, though, it’s all about the unlimited possibility of creation. “It’s more about designing and discovering new materials. And the things we’re figuring out are helpful in all these different places.”

These next-generation materials could be market-ready in five to 10 years. “There’s a lot of things we’re trying to solve,” he says. “If we’re being ambitious, maybe we’ll solve them by the end of this Army Research Office grant in three years. Then we can start making big pieces and fabricating real equipment out of it.”

With Rupert at the helm, that’s a pretty sure bet.