Asthma sufferers and others with pulmonary disorders are well acquainted with nebulizers. They’re those sometimes bulky gadgets, also known as inhalers, which disperse an aerosol stream of medication directly into the lungs.

Unfortunately, though, most commercial nebulizers are capable only of poly-disbursement, meaning they disperse droplets of varying sizes. That is not efficacious for many pulmonary drugs, which are effective only when droplets are a specific size: 2-6 microns. Adding mesh screens to the commercial inhalers helps create some droplets of desirable size, but the often-viscous medicines can get stuck in the mesh, clogging the devices. 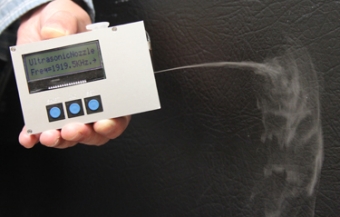 He and his research team have developed a silicon, MEMS (micro-electro-mechanical systems)-based, clog-free ultrasonic nozzle. Their success was highlighted recently in Technology, a new journal that covers cutting-edge technologies from a variety of science and engineering fields.

“Over the years, we’ve published a number of papers on the work in prestigious journals such as Physical Review Letters, Applied Physics Letters, and Lab on a Chip,” he says, “but this is the most prestigious.”

The tiny silicon device consists of multiple horn-shaped components attached end-to-end, with a silica tube running through the center. Medication is  pumped through the silica tube to the device’s tip, where strong vibrations created by a voltage at megahertz (MHz) frequency and applied to a transducer at the other end, causes the medicine to break apart and dispense in minuscule, precisely sized droplets.

The key to the device’s success is resonance; it oscillates with large  vibration amplitude on the tip, even while using low power.

The horn-shaped components, known as Fourier horns, have precise dimensions. Based on design steps developed by the team, these components amplify electrical ultrasonic vibration by a factor of two. So a device containing three Fourier horns amplifies vibration from an electric current eight times. “If you increase the vibration by eight times, that’s a lot,” says Tsai.

The team also uncovered new science about how the so-called Faraday waves behave in the megahertz frequency range. This discovery, combined with the nozzle’s ability to greatly amplify the vibration on the nozzle tip, resulted in a device that can deliver droplets of desirable size every time an electric voltage of proper frequency at MHz is applied. And it requires less than one watt of power, which means it can operate with a cell phone battery. Commercial ultrasonic devices require 10-30 watts, according to Tsai.

Because different diseases require different droplet sizes of medication for maximum efficiency, the new nebulizer device is designed to operate at varying frequencies depending on which size droplets are required. (The higher the drive frequency, the smaller the droplet size.)

With proper control of droplet size, Tsai explains, a wide range of drugs can be effectively delivered as aerosols via inhalation.

The biomedical device and the scientific concepts behind it have required nearly 15 years of research and “a lot of sweat and tears,” but has been gratifying in the end, Tsai says.

He is interested in commercializing the device. “It would be wonderful to make this available to the public; it’s something that would be good for humankind.”

The product’s niche, Tsai adds, is expensive drugs. “Some new drugs can cost $3,000 for a tiny bit, so you want to make use of every droplet. When you use a commercial nebulizer, you end up wasting a lot.”

Because the device dispenses a very fine aerosol spray, it has other potential applications as well, including cosmetics, thin and/or 3-D coatings, fuel-injection and cooling for laser surgery.

In the meantime, he and his team are working with professors of medicine Matthew Brenner from UCI and Gerry Boss from UC San Diego under an NIH grant. They are testing the device as a delivery system for an antidote used for detoxification of massive cyanide poisoning.

The project’s long – and sometimes bumpy – road from idea to device never discouraged Tsai and his team. “We never gave up,” he says. “We feel this has the potential so we continue to work on it.”