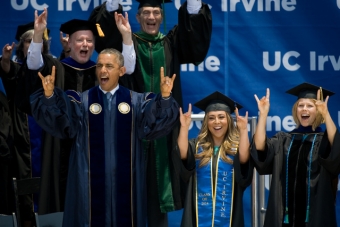 The Henry Samueli School of Engineering sent 695 Anteater Engineers with bachelors degrees, 240 with Masters degrees and 92 with Doctorate degrees out into the world this past weekend, after a full slate of graduation activities, that included a UCI-wide commencement with President Barack Obama at Angel Stadium on Saturday and a school celebration with the Donald Bren School of Information and Computer Sciences at the Bren Events Center on Sunday. Students and their family and friends attended a graduation celebration Friday that included a display of senior design projects and a ceremony in which students pledged the Order of the Engineer.

President Barack Obama greeted more than 6,000 members of UC Irvine’s class of 2014 and 30,000 family members and friends at a special commencement ceremony Saturday at Angel Stadium of Anaheim.

Obama encouraged graduates to take on the challenges of climate change in the same way the nation answered the call to reach the moon in the 1960s.

Obama gave kudos to UCI for being “ahead of the curve” on the issue.

“UC Irvine set up the first Earth system science department in America,” the president said. “A UC Irvine professor-student team won the Nobel Prize for discovering that CFCs destroy the ozone layer. A UC Irvine glaciologist’s work led to one of last month’s reports showing one of the world’s major ice sheets in irreversible retreat. Students and professors are in the field working to predict changing weather patterns, fire seasons and water tables – working to understand how shifting seasons affect global ecosystems; to get zero-emission vehicles on the road faster; to help coastal communities adapt to rising seas. And when I challenged colleges to reduce their energy use by 20 percent by 2020, UC Irvine went ahead and did it last year. Done. So UC Irvine is ahead of the curve. All of you are ahead of the curve.”

Success against climate change will take perseverance, he cautioned.

“I’m here to tell you: Don’t believe the cynicism. Guard against it. Don’t buy into it. … I want to show you how badly we need you – both your individual voices and your collective efforts – to give you the chance you seek to change the world and maybe even save it.”