Dustin McLarty, a postdoctoral researcher at the Advanced Power and Energy Program, will take what he’s learned working on UCI’s micro-grid power supply to Italy, on a Fulbright scholarship. 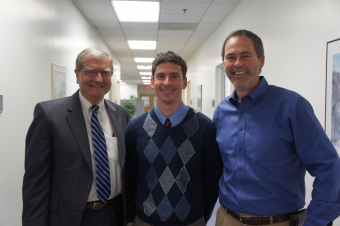 Sponsored by the U.S. government, the Fulbright Program offers highly competitive, merit-based grants for students and young professionals to study, conduct research or exercise their talents abroad. Founded by United States Senator J. William Fulbright in 1946, the Fulbright today is the largest U.S. international exchange program. It currently awards approximately 1,900 grants annually in all fields of study and operates in more than 140 countries. It is designed to increase mutual understanding between the people of the U.S. and people of other countries.

“UCI has one of the most cutting edge micro-grids in the world,” says McLarty. “It provides the campus electricity, cooling and heating with close to 99 percent self-generated power, almost none of the energy is coming from Southern California Edison.”

A micro-grid is a similar but smaller version of the traditional power grid and consists of power generation, distribution and controls such as voltage regulation and switch gears. Micro-grids integrate renewable sources of energy such as solar, wind power, hydrology, geothermal, waste-to-energy, and combined heat and power systems. They can operate on their own or be connected to the traditional grid, and they have a closer proximity between the power generation and the power user. UCI’s micro-grid integrates solar, fuel cell, thermal and natural gas to serve the campus’s needs.

McLarty’s research has to do with leveling out the intermittencies involved with a grid that relies on renewable sources of energy. “We put all these new energy sources on the grid and they don’t behave like our old ones, so we have to come up with a mix of new technologies that can interface, store and deploy the renewables in a way that levels out the power supply.”

With the Fulbright scholarship, McLarty will spend four months at the University of Genoa working in its energy research laboratory, sharing the lessons he’s learned at UCI. McLarty’s expertise involves looking at peak energy usage periods and developing models that predict and then control the micro-grid’s distribution of power, in a way that is cost-effective and energy efficient.

“I am very pleased that Dustin McLarty will receive this award,” says Associate Professor Jack Brouwer, associate director of the National Fuel Cell Research Center.  “McLarty is one of the most talented, creative and accomplished graduates of our program who well deserves this recognition and award.”

As a Fulbright grantee, McLarty will join the ranks of distinguished participants. Fulbright alumni have become Nobel and Pulitzer Prize winners, heads of state, judges, ambassadors, cabinet ministers, CEOs, university presidents, journalists, artists, professors and teachers. Since its inception more than 60 years ago, approximately 3000,000 Fulbrighters have participated in the program.