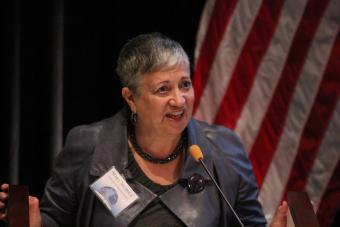 The National Fuel Cell Symposium in late February offered a meeting of the minds for researchers, policymakers and industry representatives – all important stakeholders -- in fuel cell technology.

“Finding cleaner, better, more effective ways to power ourselves around, and power the things we use every day is one of the most important challenges we face in the world today,” said UC Irvine Chancellor Michael V. Drake.

Hosted by the U.S. Department of Energy’s National Fuel Cell Research Center (NFCRC) at UCI’s Samueli School, the symposium at the Beckman Center was attended by nearly 300 people. The day’s speakers expressed their excitement that the future had arrived for fuel cells.

“Fuel cells are beginning to play a major role in the provision and generation of electrical power and in the next generation of automobiles,” said Scott Samuelsen, director, NFCRC, and Samueli School HORIBA professor emeritus. 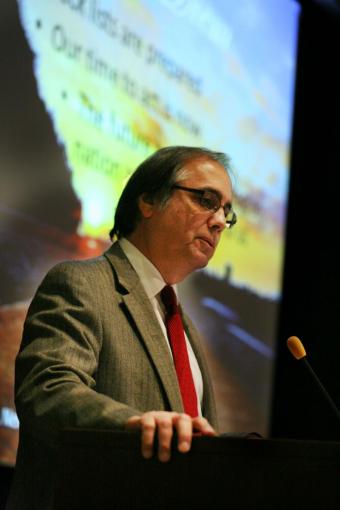 “This symposium brings together leaders from academia, government and industry; it’s an unprecedented opportunity to not only share knowledge and network, but to organize around how to move forward,” said Gregory Washington, dean of the Samueli School.

Three keynote speakers and three panel discussions addressed the progress of and future opportunities for fuel cell technology in both the stationary and automobile sectors. Three leading stationary fuel cell companies – FuelCell Energy, ClearEdge Power and Bloom Energy – participated in the morning panel. In the afternoon, executives from Toyota, Honda, General Motors, Hyundai and Mercedes-Benz spoke about fuel cell vehicles, some of which will be introduced in the U.S. market in 2015. And the late afternoon panel addressed hydrogen fueling infrastructure, with representatives from California Fuel Cell Partnership, FirstElement Fuel, Inc. and the California Energy Commission.

Keynote speaker Mary Nichols, chair of the California Air Resources Board, said, “We are at a very pivotal time for the fuel cell market. Continued vigilance and leadership is necessary. We have a lot of work to do to support these growing markets for fuel cells, not the least of which is developing the sufficient hydrogen refueling infrastructure to support early fuel cell markets. We are committed to making this work in California.”

Other keynotes were delivered by John Laird, secretary of the California Natural Resources Agency, and Bert Valdman, a senior vice president at Edison International.

“There is a door of opportunity that is open to fuel cells that many of us have worked and labored for decades to create. We need to move through that door to create a better society, better environment, better energy stability and security and a better means of mobility,” said Barry Wallerstein, executive director of the South Coast AQMD. “The time to act is now. We know what needs to be done. We are talking about transforming how we use energy for the future health of the region, the nation and our planet. Carpe diem.”