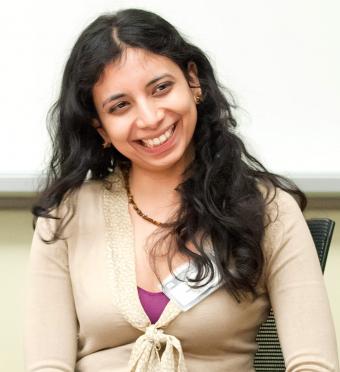 Anima Anandkumar, an assistant professor of electrical engineering and computer science, has been awarded a 2014 Sloan Research Fellowship for her work at the interface of theory and practice of large-scale machine learning and high-dimensional statistics. Bestowed annually since 1955 by the Alfred P. Sloan Foundation, the two-year fellowships go to 126 early-career scientists and scholars in the U.S. and Canada whose achievements and potential identify them as the next generation of scientific leaders. Fellows – who are nominated by their peers – receive $50,000 to further their work. “It’s a great honor to join the prestigious ranks of Sloan Fellows,” Anandkumar says. “The support from the Sloan Foundation will enable me to continue my research on large-scale machine learning.”

Her work, broadly speaking, involves building intelligent computers that can learn from the world around them, said her colleague Padhraic Smyth, a professor of computer science and statistics in the Donald Bren School of Information & Computer Sciences. “This field is very hot right now, both in academic research and in the commercial world,” he said. “Companies such as Google and Microsoft and many others are using machine learning to develop self-driving cars, intelligent speech recognition, smart cameras, search engines that can better understand what you type, and more.” Machine learning also is helping biologists better understand cancer data and climate scientists to interpret patterns in vast quantities of climate data, said Smyth, who also directs UCI’s Center for Machine Learning & Intelligent Systems. “Anima’s research is focused on the mathematical principles and computer algorithms that drive these types of applications,” he said. “In the past few years, she has pioneered a new way of thinking about these algorithms and a whole family of new mathematical modeling techniques. Her work has provided significant insights into the underlying principles of how computers can learn from data, and it has the potential to have a very broad impact in many machine learning applications, both commercially and scientifically.”

Anandkumar joined UC Irvine in 2010. She spent a year as a postdoctoral researcher at the Massachusetts Institute of Technology and earned a doctorate at Cornell University. In June 2013, she was among seven recipients worldwide of a Microsoft Research Faculty Fellowship.