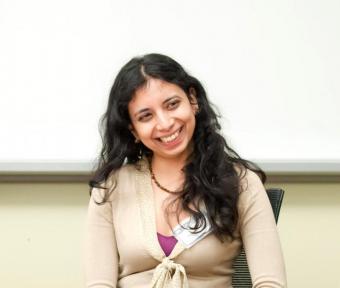 Anima Anandkumar has been awarded a 2013 Microsoft Research Faculty Fellowship. An assistant professor of electrical engineering and computer science at UC Irvine’s The Henry Samueli School of Engineering, Anandkumar is one of seven from around the world to receive this support.

"It is a great honor to receive the Microsoft faculty award,” says Anandkumar, whose interdisciplinary research spans machine learning, statistics, signal processing and optimization.  “The past winners of this award have gone on to do cutting-edge innovative research, and it inspires me to follow their lead.”

Microsoft Research awards the annual fellowships to aid talented early-career faculty members in their pursuit of breakthrough, high-impact research that has the potential to help alleviate some of today’s most challenging problems. The fellows, nominated by their universities, represent the brightest young academics in the field of computer science.

In her research, Anandkumar works at the interface of theory and practice of large-scale machine learning.

“A key focus of my research is to design efficient algorithms for high-dimensional learning, where there are far more unknowns or variables, compared to the size of the observed data,” she explains.

This high-dimensionality is a common feature of today’s ``big data'' in domains such as online social networks and bio-informatics.  As the extent of available data grows, the number of variables scales at an even larger rate if further constraints are not imposed.

“In order to overcome this fundamental ill-posed nature of large-scale learning, it is pertinent to exploit the inherent structure in data,” says Anandkumar. “My research considers modeling these inherent data properties as structural or graph-based relationships among the variables, or in the form of parametric forms such as tensor decompositions. I have designed a range of efficient algorithms which can provably discover these inherent data features and exploit them for large-scale learning.”

Through her research efforts, Anandkumar has moved theory into practice. She has applied the developed algorithms to various problems in social networks, computer vision and computational biology.

She joined the UCI faculty in August 2010. She spent a year as a postdoctoral researcher at MIT and got her doctorate from Cornell University. She has been a visiting researcher at Microsoft Research New England and is the recipient of the ARO Young Investigator Award, NSF CAREER Award, IBM Fran Allen PhD fellowship, and several paper awards.