Engineering Professor Serves as an Ambitious Advocate for Calit2 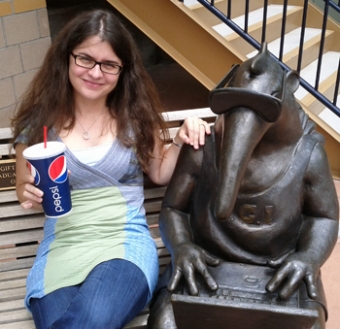 In 2006, soon after arriving at UC Irvine, a new assistant professor was introduced to an engineering school administrator who asked what her major was.

“I’m not an undergrad,” the new hire said politely.

“Oh, you’re here for the graduate program?” inquired the woman.

Was she a postdoc, then? Markopoulou explained that she was joining the electrical engineering and computer science faculty.

As the embarrassed administrator learned, appearances can be deceiving. Markopoulou, who still can pass for a grad student, is now a highly regarded EECS associate professor, well-funded researcher, entrepreneur, wife and mother, and an ardent and active Calit2 affiliate.

“In the beginning, it bothered me,” Markopoulou recalls of being mistaken repeatedly for a student. “But now I am used to it and I think it’s fun. It can be a good ice-breaker.”

Born in Athens, Greece to high school math teachers, she won first place in the nationwide Hellenic Olympiads in Mathematics at age 14. The motivated student entered National Technical University of Athens in the top 1 percent of her class, choosing electrical engineering and computer science over math.

“Technology can make a difference; you can build things,” she says. “I started university when the Internet started booming. Engineering felt like a more happening place to be than in a math department.”

She graduated in 1996, still in the top 1 percent of her class, and set out halfway across the world to Stanford, where she earned master’s and doctorate degrees in electrical engineering.

Her first year of graduate school was an eye-opening experience. Markopoulou, ever the achiever, was no longer at the very top of the heap. After receiving a 97 percent on her first programming assignment, she was shocked to learn that her score was average. “I had never met so many smart, ambitious people together in one place. It was humbling and incredibly motivating at the same time,” she says. “We were from so many different countries and different backgrounds but we all had in common our love for science.”

Silicon Valley was also entrée into the world of high-tech, dot-com entrepreneurship and successful academic-industry collaboration. She remembers the launch party for Google, which took place on campus. “I was chatting with other students: ‘What kind of name is Google? And what new remains to be done in the area of search?’” she recalls, laughing at the memory.

With doctorate in hand, she did a short stint in a large research lab; she then returned to Stanford for a postdoctoral fellowship, followed by six months in a Bay-area startup company. The experiences taught her a new lesson: her heart belongs to academia. “I tried a big lab and a startup, and they were both very interesting. But they weren’t the right places for me in the long run,” she says.

She landed at UCI, where she immersed herself at Calit2, attending workshops, collaborating on grants and setting up an office in the building.

She felt at home immediately. “Calit2 has been love at first sight for me … it is a happening place, with activity and collaborative projects, diverse groups of researchers, modern space and friendly staff,” Markopoulou says. “If Calit2 were a person, he/she would be ambitious, professional and fun to be around.”

“Athina exemplifies Calit2’s approach to research,” says Stu Ross, the institute’s assistant director for research development, who has overseen several of Markopoulou’s grants. These include a prestigious 2008 CAREER award and a $2-million NSF Cyber-enabled Discovery and Innovation (CDI) award she and two colleagues won in 2010 for a collaboration spanning computer engineering, biology and sociology.

“She is interdisciplinary and she addresses basic theoretical problems as well as their practical implications,” Ross says.  “She’s hardworking, she writes extremely well, she’s willing to work with private companies and she gives priority to finding funding for her research group in addition to funding for her own research.”

The numbers speak volumes – she has raised $5.2 million as PI or co-PI, $3 million of which was for her own research. “I have been lucky with fundraising so far; fingers crossed, I don’t want to jinx it,” she laughs. “But it’s not all me. There are co-PIs on those grants. And a lot of credit goes to my students. After we built critical mass in the group, things just seemed to happen on their own.”

One of those students was Hulya Seferoglu, Markopoulou’s first Ph.D. candidate. Seferoglu attributes, at least in part, her new faculty position at the University of Illinois, Chicago, to her advisor’s influence. “Athina supported and guided me,” she says, encouraging her to attend conferences, workshops and funding meetings, and secure relevant summer internships. “These were important steps … I had a chance to present my work in different venues and learn different research aspects.”

Markopoulou’s own research focuses on designing, analyzing and optimizing computer networks, including network coding, online social and mobile networks, measurement and security. “I got interested in this field because it has a good mixture of theory and practice,” she says.

Last year, she won an NSF Innovation Corps (I-Corps) grant that helped her explore the marketability of one of her recent projects. “Microcast,” which grew from her NSF CAREER award and an Air Force MURI (Multidisciplinary University Research Initiative) award, is an application that enables mobile devices that are near each other to automatically share their network connections; this allows them to aggregate their bandwidth and download content much faster.

Assistant Vice Chancellor for Alumni and Constituent Relations Goran Matijasevic, who also is the executive director of the UCI Chief Executive Roundtable, mentored the Microcast team during its intensive six-week I-Corps training program. “I admire Athina’s technical brilliance and entrepreneurial spirit, but also her willingness to learn new things,” he says. “These characteristics have contributed to her success so far and will make her even more successful in the future.”

After determining that the project did indeed have market potential, the Microcast team took the next step and launched Shoelace Wireless – named for its ability to tie mobile devices together. The team includes Anh Le (a former postdoc in Markopoulou’s group) and Christina Fragouli, a longtime friend and collaborator, who is currently at UCLA. The startup received a $150,000 Phase 1 SBIR (Small Business Innovation Research) grant and recently moved into Calit2’s TechPortal incubator.

“Athina has great research vision, execution and delivery. She is very good at identifying great collaborators and giving them the best environment and support to perform,” says Le, the company’s chief technology officer.

Fragouli concurs. “Athina is an extremely smart and creative researcher. She is very organized, motivated and determined in her pursuit of excellence,” she says.

The high-energy dynamo says she is learning to delegate. “I understand we can get more from a team than we can get from a single person,” she says. “But I still spend more time than I should on all kinds of things.”

Carter Butts, a key collaborator and member of the CDI team – calls her “tough, sharp and no-nonsense,” but also cites her generosity and strong sense of fun. “I think Athina embodies the spirit of Calit2,” says Butts, UCI sociology professor. “She combines creative and rigorous science with an engineer’s pragmatism, creating technologies that address important real-world problems.” 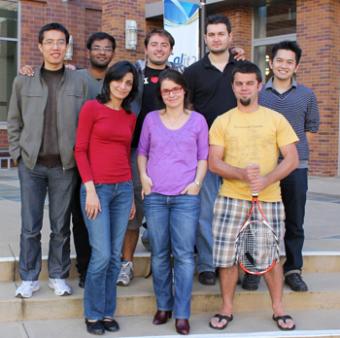 That pragmatism has benefits outside of academia, too. Markopoulou and husband Kristian Jessen are parents to four-year-old Hector, born when both were striving to earn tenure (Jessen in chemical engineering at the University of Southern California). “It was a pretty stressful period for our household,” she recalls.

The family returned recently from a sabbatical year in Denmark – Jessen’s birthplace – where both worked as visiting professors at Danish universities. “A colleague once said that in academia, you have the flexibility to work any 80 hours of the week you like,” Markopoulou grins. But the commitment came with a bonus – their son got to spend time with both sides of his international family this year. “That was important for us.”

What is next on Markopoulou’s agenda?  At the top of her list is expanding her research efforts. “At this stage, I hope I can afford to take some risks with the topics I choose and think bigger than I could while I was trying to attain tenure,” she says. “My favorite part of the job continues to be working with my group. Seeing them do well is very, very rewarding.”